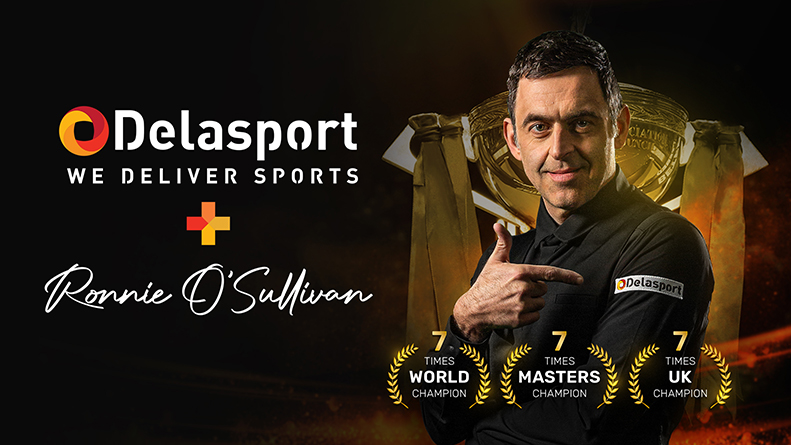 Is a brand ambassador worth the investment? Why and how to choose the right ambassador for your brand

Earlier this year, Delasport partnered up with the world Snooker champion Ronnie O’Sullivan to be their brand ambassador and bring the iGaming solutions company to the attention of millions around the globe. We talk to Delasport CEO, Oren Cohen Shwartz to find out more about the partnership, how it came about, and what it’s like to work with one of the most famous snooker players of all time.

Ronnie O’ Sullivan is a strong choice. How was it decided to look for a brand ambassador in the first place?

Obviously, we knew Ronnie as a snooker superstar for many years prior to initiating the partnership. We love sports and in Snooker, Ronnie is a living legend. It was last year when we decided to partner up with a tier 1, world-class sport athlete brand ambassador.  We invested significant time raising names, with many of us putting forward our favorites. However, one name did come up more than others, and that was Ronnie. From there, we looked a little more closely at him, his values and how suitable he would be for us. It quickly became clear that he was our man.

What were the reasons to partner up with Ronnie O’ Sullivan? And how did you know it would be a good fit?

To have an effective brand ambassador, you need to share certain values, otherwise, the chemistry just won’t be there. The more we learned about Ronnie, the more we wanted to work with him. He has a positive energy about him and it’s clear that he is passionate about what he does – and about winning. He is also down to earth and realistic about himself, which is refreshing to see from a sports superstar. We share his values of drive, humanity and positivity and therefore knew we would work well together on spreading that message.

What’s it like working with him on a personal level?

Working with Ronnie is a real pleasure. He is very approachable, has an easy-going personality and is always enthusiastic about what he does. I spent long hours with Ronnie, especially when we shot the “Ultimate iGaming Solution” clip in Romford snooker club earlier this year. Ronnie is highly professional, and friendly and is a true advocate of positive thinking, being in the moment, and being kind to oneself. A true gent.

What does he do in his role as brand ambassador?

Other than tournaments, we have launched a massive holistic, cross-channel marketing campaign featuring Ronnie, and as I mentioned earlier, we have produced a cinematic clip where Ronnie showcases our products while playing snooker.

Can you tell us more about the campaign?

The campaign slogan is ‘TIME TO GROW’, the idea being to raise awareness of Delasport’s brand, products, services, and solutions on a global level, and to get B2C operators intrigued to learn more about our Sportsbook, Casino and PAM. The time-to-grow sentiment is addressed to casino brands that should add a Sportsbook to protect and increase revenue streams, or to those who already have a Sportsbook that is underperforming. We have launched the campaign both online and offline, featuring Ronnie in different postures and using his signature as well.

Offline usage included magazines, ads and in-conferences flyers, snooker merchandise giveaways signed by Ronnie, and video clips. For online, we have published ads in eight different online newspapers including full site takeover. We also deployed the ad across social media channels like Facebook, Instagram and Twitter - including a big-budget paid campaign on LinkedIn. Other than the business level marketing we also used Ronnie’s as our ambassador for company branding for recruitment purposes.

How has it performed so far?

The campaign has already aroused great interest in us as Ronnie is well-known around the world, and the design of the content itself has been created at a very high level. The strategy we used also contributes to this success as we launched the campaign across different channels simultaneously, with the same consistent ads and message.

We got great CTR for the ads and awesome feedback from our colleagues in the industry. I am also proud to say that we already got the campaign nominated for four industry awards: ‘Sportsbook Marketing Campaign’, ‘Best Use of a Brand Ambassador’, ‘Best B2B Marketing Campaign of the Year’ and ‘Best Supplier Marketing Campaign.’

Can you tell us more about the video?

With someone like Ronnie, just using pictures won’t do. He has an incredible skill that can only be appreciated when in motion, so we decided to film a brand video with him. The concept was to have Ronnie doing what he does best: playing snooker - while showcasing Delasport’s products, solutions and services.

The clip intro starts out in space. We had this idea for a “snooker galaxy” where snooker balls function as planets and stars, where one of them has a Saturn-like. That aligned perfectly to Delasport’s logo, which is in a ring shape. In the next scene, Ronnie enters the famous Romford Snooker club in London, where he sets a snooker table and starts shooting balls using cool tricks. Each ball represents one of Delasport’s products or services. The clip includes high-end 3D rendering and special VFX.

Why go with a brand ambassador in the first place?

We are always looking for ways to increase brand awareness on a global level. Ronnie is a very respectful sportsman worldwide and is also known for being colorful, and as a person that draws attention. His gameplay is considered to be non-conservative, and while he is gifted in snooker, he is confident in his game and takes risks that other snooker players won’t. We, therefore, knew that Ronnie can create a buzz. I wish I can tell you now, that we knew, months ago, that Ronnie was going to win the world championship and we partnered up with him for that reason; but jokes aside, we did truly believe he was capable of it. When Ronnie is focused and is in his zone, it is impossible to beat him. And, we aren’t the only ones who see the potential in Ronnie: Netflix is currently producing a full-feature documentary with him.

What can we expect to see from Delasport and Ronnie in the future?

We look forward to a long and mutually beneficial relationship with Ronnie. With his last win in the Snooker world championship, Ronnie officially became not only the number one snooker player in the world, but also the biggest snooker player of all time. He holds the Triple Crown Roll of Honor with 7 times world Champ, 7 times UK Champ and 7 times Masters titles. I have no doubt that Ronnie will attempt to gain one of each awards next year and by that he will break another world record of 8 world championship titles.

From a marketing point of view, we have some great plans in the pipeline, but these are top secret - so we’ll just have to say ‘watch this space’ for now.