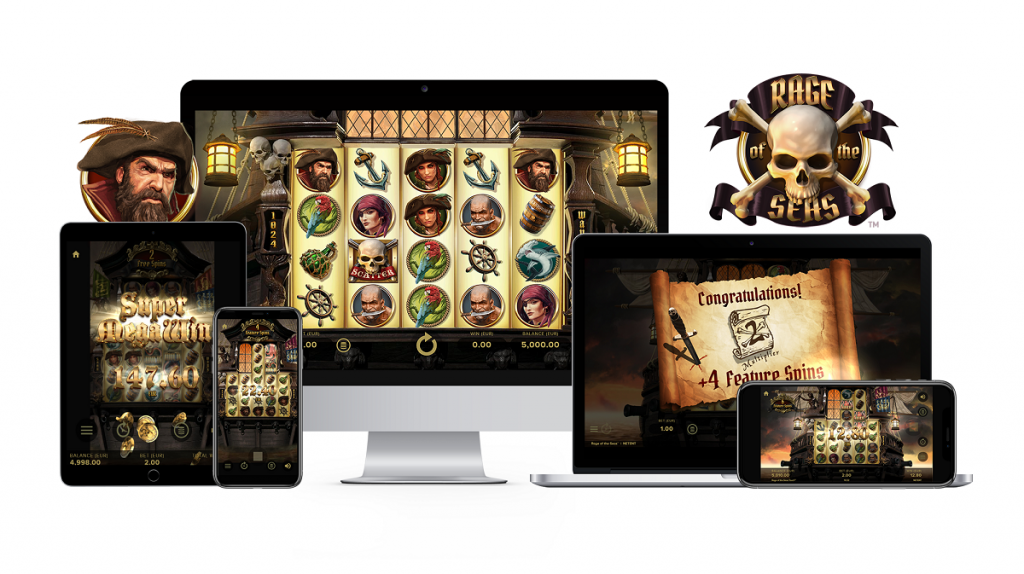 NetEnt’s Rage of the Seas

NetEnt is taking players on an adventure to the seven seas in its new pirate-themed slot Rage of the Seas.

The 5x4 slot, which has expanding reels that can create up to 5,488 betways, is rich with features, including Spreading Wilds and Stacked Wilds, as well as Major and Minor Reel Upgrades to boost winnings

The base game also offers a double Multiplier, Free Spins and Extra Free Spins, creating an action-packed gaming experience that maintains engagement levels throughout the session.

“Rage of the Seas is one of the most feature-loaded titles in our portfolio,” said NetEnt chief commercial officer Andy Whitworth. “We’ve taken the gameplay to the next level whilst maintaining a level of familiarity, so it is easy for players to follow instantly.

“The game’s classic theme and top-quality graphics create the perfect setting for the action to play out, making this a slot with enhanced engagement and retention potential.”

“Everyone at Playtech Origins is excited about the release of Joker Hot Reels - a classic fruit machine-style slot, designed for experienced players and newcomers alike,” said Raz Oved, game producer for Origins. “We’ve identified a growing demand for these kind of games in many markets, based on an engaging maths model that’s proving extremely popular.

“Whenever a stacked Joker Wild lands in this fast-paced 5-line slot, it sticks and triggers three Respins – and since this game pays both ways, there’s clear potential for a big win. Two Mystery Jackpots make this game even more exciting!”

The 4x6, 4,096 payline title features tumbling wins and a missile feature which fires into random symbols on reels two, three and four, turning them into Wilds.

“Star Bounty takes players on an interstellar journey to collect huge wins amongst the stars,” said Pragmatic Play chief commercial officer Melissa Summerfield. “With a futuristic theme, fantastic features, and a lucrative Bonus Round, it has all the ingredients to be another top performer for our portfolio.

“We continue to develop a wide range of slots and our impressive production rate is testament to the work of the entire team at Pragmatic Play.”

Stakelogic’s The Legend of Hercules

The latest game release from Stakelogic is The Legend of Hercules, an action-packed slot featuring Stacked Wilds, Stacked Scatters and the supplier’s Super Stake system.

Players fight alongside Hercules in the 5x3 reel, 30 payline slot, which includes a range of bonus features such as Stacked Wilds and Stacked Scatters.

Wilds can land at random at any time during the base game and stack on top of each other to increase the chance of landing a winning combination. Stack seven Scatter Symbols across the reels and the Free Spin bonus round is triggered.

“The Legend of Hercules takes a classic and popular slot theme and gives it the Stakelogic treatment,” said Stakelogic CEO Stephan van den Oetelaar. “This means striking graphics, authentic sound and the most engaging and entertaining gameplay imaginable.

“The Stakelogic team has incredible momentum behind it following a run of hugely successful games and we believe The Legend of Hercules will prove to be just as popular as other chart-topping titles launched earlier in the year.”

“With Rise of Egypt Deluxe, we’ve taken everything from its classic predecessor and added more,” said Playson head of product Vsevolod Lapin. “This new version of a Playson fan-favourite incorporates a revised math model and showcases our first buy on demand feature.

“This immersive new slot transports players back to a time of mysticism, and its myriad features combined with superb playability make it the perfect addition to any operator’s offering.”

“Don’t get me wrong, we are the only supplier that makes three different types of games, so we’re committed to innovation, iteration, and creating great games that players want to play, but sometimes, less is more. This new game is simple to play, visually great, audibly beautiful and will be great for acquisition and retention.”

iSoftBet has released its latest slot game Western Gold Megaways, the follow-up to its popular Aztec Gold game and the sixth Megaways licensed title to be released by iSoftBet this year.

“Western Gold Megaways transports players to the badlands of the frontier in a dash to find riches while enjoying a thrilling gaming experience,” said iSoftBet head of games Mark Claxton. “Featuring the popular Megaways mechanic as well as a Hold and Win bonus round, players have the chance to win enormous sums in the Wild West town where the Sheriff rewards good behaviour. We can’t wait to see how it is received by our fans across the globe.”

Play’n GO has released a trio of new titles through The Wealth Series of games, comprising Celebration of Wealth, Temple of Wealth and Beast of Wealth.

“As a company, we are always looking to push the envelope and move the industry forward,” said Play’n GO chief executive Johan Törnqvist. “The release of the Wealth Series reaffirms our commitment to providing our partners with more; more variety and more quality within that.

“The Wealth Series is a new type of way to look at gaming; a unified gaming experience across three fantastic titles, who knows where this can lead.”