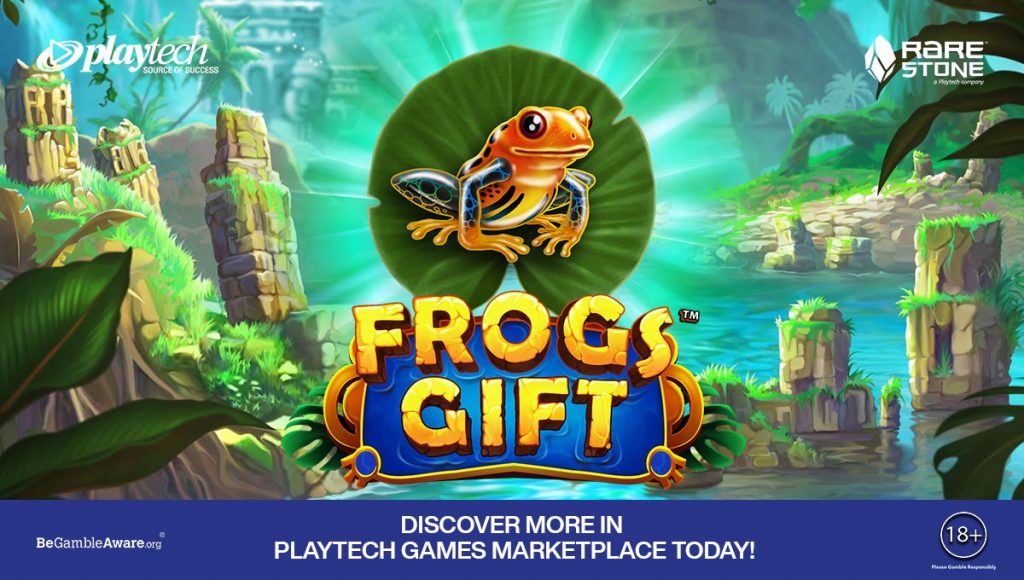 This week games round-up from Gaming Intelligence includes a host of new releases from the likes of Playtech, Pragmatic Play, Stakelogic, Microgaming and RubyPlay among others.

The latest release from Playtech’s Rarestone studio is Frogs Gift, a 20-line slot game from the makers of the Fire Blaze Jackpots series of games.

Frogs Gift offers multiple features and a high-frequency hit rate designed to appeal to VIP players. In the game, four or more Piranha symbols trigger a unique respin feature with a chance to win one of four jackpots.

“Frogs Gift is the latest launch title from our studio, and we know players will have as much fun playing it as we did creating it,” said Rarestone head of game development James Stewart. “Frogs Gift offers feature-rich, high-paying action with a high RTP and 2 features with a combined hit rate of 1 in 60 spins.

“In the main feature, the Frog keeps awarding prizes from 8 possibilities. Once you get to the final 2 prizes, there's a chance to win a Mega Reel Spin that guarantees 1 of 4 major prizes (up to 2000x).”

Pragmatic Play’s Return of the Dead

Pragmatic Play has unveiled Return of the Dead, a 5x3 slot that transports players to the Egyptian desert in its latest game collaboration with Reel Kingdom.

“Return of the Dead sees us partner with Reel Kingdom once again for another high-octane, high volatility slot adventure,” said Pragmatic Play chief commercial officer Melissa Summerfield. “As we continue to develop an impressive number of slots per month, the importance of variety has never been more evident, so working with Reel Kingdom allows us to target new demographics and the process has been a real delight for us.”

Stakelogic has launched Celtic Spirit Deluxe, a new online slot repurposed from one of Reflex Gaming’s most popular land-based games.

“We are very excited to release our latest slot game in conjunction with Reflex Gaming and offer the online players yet another new experience in gaming,” said Stakelogic CEO Stephen van den Oetelaar. “Boasting an impressive land-base following and having such a renowned pedigree, Celtic Spirit Deluxe is sure to be a hit with our loyal online player-base.

“Following the acquisition of our supply license from the UK Gambling Commission and the recent launch of our first Megaways title, which is under license from Big Time Gaming, Q4 promises to continue the success we’ve seen in 2020, which is testament to the exceptional work our team has produced this year.”

Microgaming’s Tarzan and the Jewels of Opar

The latest collaboration between Microgaming and Gameburger Studios sees the release of 5-reel, 20 payline slot, Tarzan and the Jewels of Opar.

“Gameburger have pulled off another incredibly fun and playable game in Tarzan and the Jewels of Opar, which has all the hallmarks of a classic Microgaming title,” said Microgaming director of games Andrew Booth. “The game was an absolute hit during an early exclusive release period, consistently performing among our top five games per operator in terms of player retention alone. Players are going to love this new spin on a branded classic.”

Yggdrasil has released Hades, a new 6x6 slot set in the underworld realm of the King of the Dead which features the supplier’s newly launched Gigablox mechanic.

“We’re delighted to launch our latest Gigablox title, Hades, as we invite players to enter the King of the Underworld’s realm and escape with the riches below,” said Yggdrasil senior games strategist Jonas Strandman.

“Our commitment to innovation has seen us develop a number of new mechanics this year and Gigablox turns every spin into one with huge win potential, appealing to all player types. The mechanic has already been a huge hit with players and we are thrilled to launch this second Gigablox title with its dark theme, fantastic graphics and engaging features.”

RubyPlay has launched a new Chinese-themed 5-reel slot He He Yang, where players are introduced to the god of wealth Cai Chen.

“Everyone knows the prominence of Greek and Norse mythology in slot themes, particularly by the European game developers, but we felt that Chinese ancient mythology was maybe a little under represented,” said RubyPlay chief operating officer Ittai Zur. “This inspiration from the Far East has culminated in He He Yang. As usual the game has a very land-based slot feel, and we’re confident people will enjoy playing it.”

“32 Cards is a tantalising game that truly captures the spirit of the Indian subcontinent,” said Ezugi head of product Lionel Dardic. “It is a simple game that has been designed for mobile play and the experience offered is second to none.

“While 32 Cards has been developed with the Indian market in mind, it will undoubtedly appeal to international players who love the authentic experience offered by live casino. What’s more, the fast-paced gameplay is guaranteed to keep players on the edge of their seats.”

Playson has launched Egyptian-themed Book of Gold: Multichance, the latest addition to its series of Book of Gold titles.

“Our Book of Gold series is back with a bang and we’re sure that players will enjoy the latest Egyptian adventure that we’ve created,” said Playson head of product Vsevolod Lapin. “Book of Gold: Multichance provides an entertaining experience for those who enjoy classic themes with modern twists.

“With special expanding symbols within the Free Spins mode that pay regardless of bet lines, there even more ways for players to secure riches from the tombs of Egypt.”

GAMING1 has expanded its slot portfolio with the release of Mega Spinner.

“Designed for nostalgic lovers of classic slot gameplay, Mega Spinner combines timeless symbols and an original casino soundtrack with fresh enhancements such as our Mega Spinner Wheels,” said GAMING1 chief operating officer Sylvain Boniver. “We are confident this slot will prove popular in a wide range of regulated markets, and cannot wait to introduce it to our customers and their players.”

“With its mystical theme and bewitching win potential, Phantasmic Fortunes is the perfect addition to our portfolio in time for Halloween,” said iSoftBet head of games Mark Claxton. “With players aiming to rise from the depths of the reels to claim their wins with our riches-filled orbs and lucrative bonus rounds, Phantasmic Fortunes is set to be another thrilling title for iSoftBet.

“It also marks the debut of another exciting new feature for us, Xpanding Ways, which we will see more of in the future.”

Kalamba Games has expanded its slot portfolio with the release of Pawprints of Purrsia, distributed via the Oryx Gaming platform.

“With Pawprints of Purrsia we offer players a fun and quirky theme but with a game play and feature set that can offer some serious rewards,” said Kalamba Games chief operating officer and co-founder Alex Cohen. “Pawprints of Purrsia is a fur-midable addition to any serious, or not so serious, operator’s lobby.”

“Spinential has already proven itself as a serious revenue driver for operators across multiple regions globally - both for its regulation-friendly design and broad appeal for players in offering an enhanced experience,” said Evoplay Entertainment CEO Ivan Kravchuk.

“We’re thrilled to deploy this innovative product in a move that provides our popular slot title, Elven Princesses, with one of the best in-house engines available on the market, and we’re looking forward to taking the game’s experience to a whole new immersive level.”

Live 5 has launched its newest slot Wild Gods of Egypt exclusively with Sky Betting and Gaming, ahead of a wider network release next month.

“We are beyond excited to be launching Wild Gods of Egypt exclusively with Sky and for players to be the first to go on our Egyptian adventure,” said Live 5 CEO Lloyd Butler. “Wild Gods of Egypt is a visually striking slot with gameplay to match thanks to the different Wilds that land during the base game, transforming wins into potentially mega wins.

“We believe it will be a big hit with players and hope they enjoy the wild Egyptian adventure it takes them on.”

Green Jade Games has released Extreme 7, a new slot offering no bonus features and a return to players (RTP) up to 99.09 per cent.

“Our most recent slot that we stripped back - Neon Lights - with no bonus game and all of the RTP in the base game surprised us with its popularity in certain territories - especially in Asia - so we decided to follow this up with one that delivers even more excitement,” said Green Jade Games chief commercial officer Mark Taffler.

“We are also excited to be the first developer to launch a slot that has an RTP of 99.09 If customers wish to reward their VIP’s they now have only one choice - Extreme 7.”