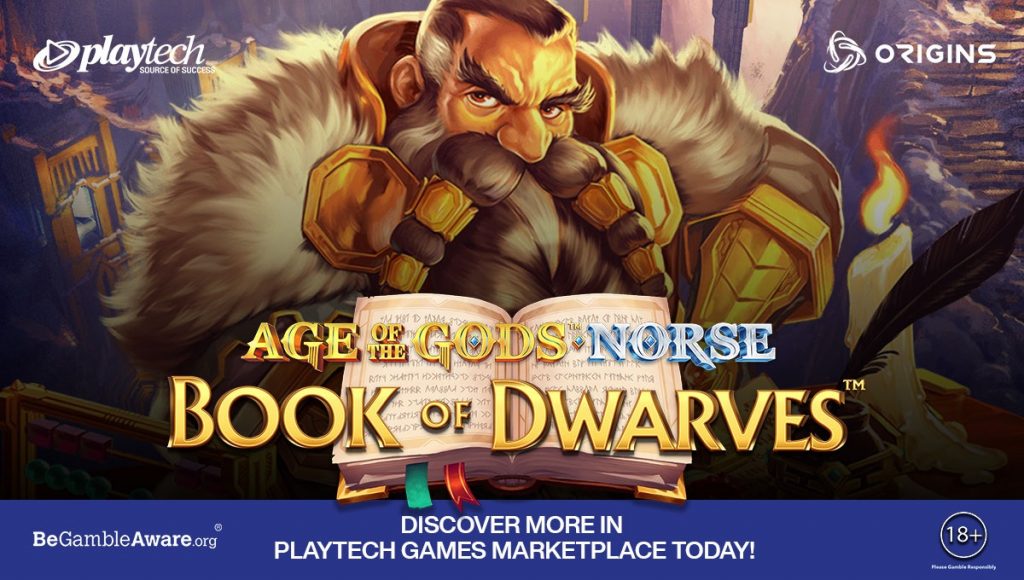 Playtech’s Age of the Gods Norse: Book of Dwarves

Playtech’s Origins studio has released the newest instalment in the popular Age of the Gods: Norse series of slots.

Age of the Gods Norse: Book of Dwarves is a 5x5, 50-line high volatility slot and follows the recently released Ways of Thunder and Gods & Giants slots in the Norse series.

“With multi-level Free Games, potentially indefinite retriggers and expanding mega symbols, Book of Dwarves is set to be the most exciting Age of the Gods Norse game yet,” said Yehonatan Tishler, game producer for Origins. “As the levels rise, the more valuable symbols expand too, creating fantastic win potential.

“With the chance to win one of three Age of the Gods Norse Jackpots on any spin too, we’re sure Book of Dwarves will prove highly popular with both fans of the suite and fantasy-themed games - or any player who enjoys innovative features with the potential for big wins.”

Pragmatic Play has released Gems Bonanza, a new 8x8 slot filled with symbols which, when connected in groups of five or more, pay out as a win before new symbols tumble from above.

“With tumbling wins, every spin can lead to more wins, and with the nature of the Gold Fever feature, these wins can quickly increase in value exponentially. We’re delighted with Gems Bonanza and can’t wait to see how it is received by players.”

“Book of Spies: Mission X is our most innovative game to date,” said Spearhead Studios game development director Kevin Corti. “With its super-cool theme and cast of great characters, our team had a lot of fun designing and building it.

“With the xWays and xNudge features able to trigger on every spin and with the chance to get up to 21 free spins (which can retrigger), players will easily appreciate how Book of Spies: Mission X can deliver big thrills and big wins.”

Lightning Box is hitching a ride across the African wilderness in its new game Kalahari Safari, which has gone live with Betsson for an exclusive two-week period via the SG Digital platform.

“Kalahari Safari promises to be a thrilling ride for those seeking adventure and big wins,” said Lightning Box CEO and co-founder Peter Causley. “We’ve had lots of success with African themed titles in recent times and we’re hopeful players will enjoy this one just as much.”

“Habanero fans with an appetite for action should dig out their dancing shoes and dress up for a party, because we’re marking the globally renowned Mexican festival, Día De Los Muertos, with a flamboyant new gaming title, Taberna De Los Muertos,” said Habanero head of corporate communications Toni Karapetrov.

“Its inviting theme, innovative gameplay features including the high-volatility Ultra Mode for more experienced slot enthusiasts, and stunning graphics matching those found throughout our portfolio, provide all the ingredients for a night to remember.”

Yggdrasil has released its third YG Masters game in partnership with Dreamtech Gaming with the launch of Asian-themed slot Elemental Princess.

“Elemental Princess brings the powers of all four key elements together as players look to harness the Princesses’ abilities to win huge amounts,” said Yggdrasil head of Partner programs Stuart McCarthy. “Our partnership with DreamTech Gaming has seen thrilling additions to our portfolio already and this looks set to be yet another hit added to the growing YG Masters offering.”

DreamTech Gaming CEO Thomas Lu added: “This is our third release as a YG Masters partner and adds a different perspective after Ice and Fire and Medusa: Fortune and Glory.

“With helpful guardians of the elements on hand, players will enjoy their journey across the game and hopefully find bountiful riches throughout. Being part of the YG Masters initiative has allowed us to flourish over the course of the year and we’re already looking forward to the release of our next title.”

“With its engaging gameplay and top game mechanics, King of Charms will no doubt captivate many slot fans worldwide,” said Inspired vice president of Interactive Claire Osborne. “We’re thrilled to add this combination of vibrant visuals, top graphics and a popular theme to our ever-growing portfolio of international online and mobile games.”

Booongo has released the sequel to its popular slot, Sun of Egypt, featuring more jackpots and several new features.

“Our portfolio has a number of fan favourites, and with Sun of Egypt 2, we have ramped up the gameplay of the original slot to a whole new level,” said Booongo head of account management and business development Yuriy Muratov. “With a lucrative respins round, artfully created slot surroundings and an immersive soundtrack, players will be searching the desert far and wide for life changing wins in our latest hit.”

Hacksaw Gaming has exclusively launched its My Lucky Number slot game with Enlabs’ Optibet and Laimz brands in Latvia, offering a €25m prize for a period of three months.

“Due to local regulations we have never been able to offer our Latvian customers the chance to win a truly life changing sum of money. Hacksaw’s insured high fixed prize model allows us to do exactly that and I am certain our customers will be as excited about it as we are,” said Enlabs chief product officer Chris Davis.

Hacksaw Gaming chief operating officer Marcus Cordes said: ‘We couldn’t be any more excited for this exclusive launch in Latvia. Optibet has a very strong reputation and brand presence in the Baltic countries so we are thrilled to take a big leap with them into the Latvian market with My Lucky Number.

“This game has proven to be a hit by offering the largest high fixed prize within the industry so we are sure it will be a huge success. Optibet has been a fantastic partner since launching in January 2020 and we are sure that this is just the beginning for our partnership.”

Play’n GO’s latest slot release is Disco Diamonds, a 5-reel slot that takes players back to the 1980s glam of the disco age.

“Operators have to cater to a wide variety of tastes and preferences within their audience,” said Play’n GO chief product officer Martin Zettergren. “Even a single player can change their mind on what type of game they want to play from day to day. We provide titles that can provide entertainment to a wide variety of players, from simple titles like Disco Diamond that anyone can pick up and quickly get into, to more in-depth games that people return to time and time again for the detail of it.”

The latest game from Evoplay Entertainment takes players to Ancient Egypt with the release of Book of Keno, featuring the supplier’s new Spinential Game Engine.

“We’ve created an enthralling new version of the beloved classic Keno in our latest immersive release, Book of Keno,” said Evoplay Entertainment CEO Ivan Kravchuk. “Taking the fan favourite to a whole new level with stunning animations and an intriguing theme, we can’t wait to introduce it to players.

“A stellar addition to Evoplay Entertainment’s diverse portfolio, the title features our Spinential game engine, which is designed to elevate the player experience with accelerated loading and download speeds as well as innovatively enhanced gameplay.”

“We are delighted to launch Diamond Wins: Hold and Win, our latest gem of a game and a glittering addition to our classic Timeless Fruit Slots portfolio,” said Playson head of product Vsevolod Lapin. “Players are sure to be dazzled by the game’s precious stones, gleaming jackpots and the shimmering star of the show, the popular Hold and Win mechanics.”

The latest game release from Red Rake Gaming is Million 777, a 6x10 slot providing players with one million ways to win.

The game features a minigame where players can win up to 300 times their bet and increase their winnings with the Minor, Major and Grand wins.

Million 777 also includes all the features from the supplier’s Million 7 game, including the Money Collect feature, where symbols turn into banknotes and fill the screen to increase the win, while Gold M symbols trigger the action-packed Frenzy feature.

Realistic Games has launched an online version of Super BAR-X Pull Tab across its operator network in partnership with land-based supplier Electrocoin.

“It’s great to see Super BAR-X Pull Tab available to all our partners and it will no doubt make for another strong performer in our Electrocoin collection,” said Realistic Games commercial director Robert Lee. “The concept marries perfectly with the instant win format and we’re pleased to be able to bring these iconic land-based slots to new online audiences.”

Electrocoin president Gabino Stergides said: “Super BAR-X Pull Tab is another fantastic game in the collection of Realistic’s quality online adaptions of our classic titles and we’re pleased to see it perform so well across the Microgaming network.

“We’re positive it’ll make a strong addition for all of Realistic’s partners and commend the team for engaging a new generation of players with their recreations of old classics.”