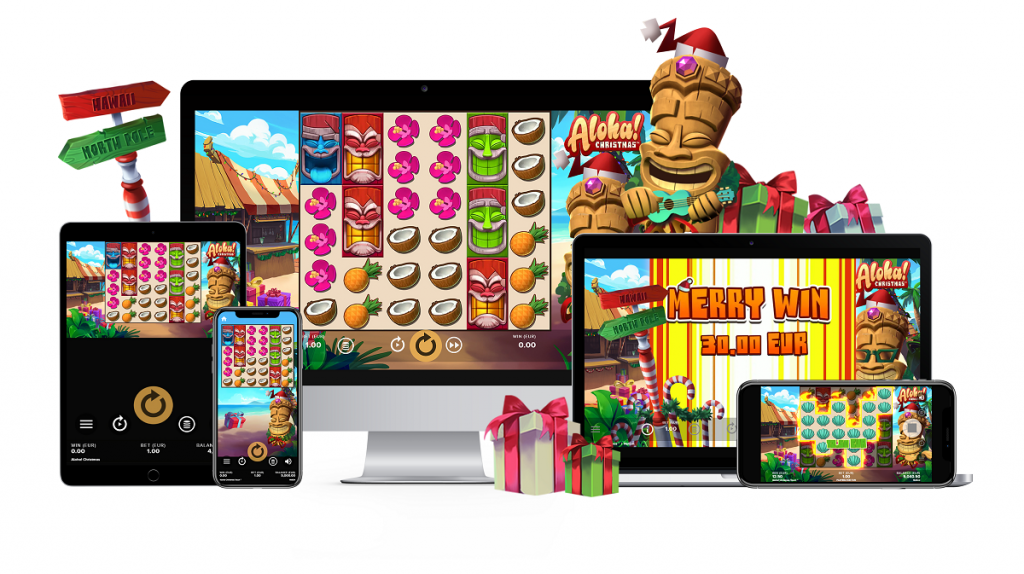 This week’s games round-up from Gaming Intelligence includes a host of games from the likes of NetEnt, Pragmatic Play, iSoftBet, Inspired Entertainment and Microgaming, among others.

NetEnt has given a festive makeover to one of its most popular games, Aloha! Cluster Pays, to mark the start of the holiday season.

“Aloha! Cluster Pays ranks highly in our hall of fame, providing the perfect setting to create a Christmas title that brings a touch of sunshine as well as seasonal cheer to brighten up the cold winter days and nights,” said NetEnt games director Carl Ejlertsson. “Combining the well-loved features of the original with some twinkling twists and increased payout potential, we’re expecting Aloha! Christmas to be a real treat for players in the lead up to the holiday.”

The King is a regular-sized Wild on the reels, while the Shield symbol will take a 2x2 position on the grid, substituting for any symbol and also acting as a Wild. To trigger the Free Spins mode, three or more Bonus symbols must appear on the reels, giving players up to 12 free spins. During the Bonus Round, any Shield symbols that land will also have a random multiplier of up to 25x.

iSoftBet has unveiled its biggest release of the year with the launch of Queen of Wonderland Megaways, the latest addition to its Twisted Tale series of games.

Transporting players to the magical realm of Wonderland, it is the first game to combine unlimited multiplier Megaways free spins and iSoftBet’s Hold and Win respins.

“Journey into the magical world of Wonderland in our newest Twisted Tale hit, Queen of Wonderland Megaways,” said iSoftBet head of games Mark Claxton. “With its familiar theme, huge win potential and great design, it's easy to journey through the looking glass and immerse yourself in our latest title.

“Combining both an unlimited multiplier Megaways free spins mode and a Hold and Win bonus feature means players can enjoy the best of both worlds while ensuring that any bonus mode can leave them richer than the Queen herself thanks to the multiplier which can be carried over into the cash respins.”

Inspired Entertainment has expanded its games portfolio with the launch of pirate-themed 6x5 slot Bonus Island.

“Bonus Island is one of our standout titles of 2020 and one of my absolute favourites,” said Inspired chief product officer Steve Collett. “In addition to the highly polished pirate theme and 15,625 ways to win, the new Mystery Boost mechanic can change blanks into possibly winning symbols or coins.

“The math is designed to give players great bonus wins, but reduce the amount of 1,000x wins, something our operator partners are telling us is very important to them at the moment. Watch this game rise to the top of the rankings - it really is doublooning good.”

"Spin Boost is an exciting feature that has already resonated with players since launching earlier this year," said Blueprint Gaming director of marketing and relationships Jo Purvis. "They control their own destiny and decide whether they want to take a chance and increase their free spins, which spices up the gameplay for them.

"Lion Thunder highlights the flexibility in our development processes as we continue to deliver new gaming formats to our slots library, allowing operators to offer a wide variety of themes and mechanics to players."

Playson has launched Legend of Cleopatra: Megaways, a revamped version of one of its most popular games featuring Big Time Gaming’s licensed mechanic for the first time.

“Legend of Cleopatra: Megaways takes our thrilling ancient Egypt-themed gaming title to the next level with the addition of the legendary Megaways mechanic, as well as a treasure-trove of fresh enhancements,” said Playson head of product Vsevolod Lapin.

“The launch helps Playson’s highly innovative content offering, which has been nominated for a host of industry awards, continue to captivate an ever-growing audience.”

Green Jade Games has launched its first branded game through a partnership with Rednex, the Swedish band behind the iconic Cotton Eye Joe song.

“Cotton Eye Joe is a truly iconic song and provides the best possible soundtrack for Rednex K.O which captures the fun and chaos of the redneck world in a slot that is thrilling and entertaining to play,” said Green Jade Games chief commercial officer Mark Taffler. “We’re delighted to launch a branded game so early on in our journey as a content developer and couldn’t have wished for a better partner in the rootin’- tootin’ Rednex.”

“Pirates 2: Mutiny combines spectacular visuals and innovative features for a captivating game centred around an ever-popular theme,” said Yggdrasil senior games strategist Jonas Strandman. “This slot is packed with fun features that increase the ways to win and I’m sure it is going to be a big hit with players.

“We pride ourselves on the quality of our games that are hugely engaging and fun to play, so raise the Jolly Roger and climb aboard for some swashbuckling antics in Pirates 2: Mutiny.”

Yggdrasil and YG Masters partner AvatarUX have unveiled the latest addition to the Popwins series of games with the release of BountyPop.

“The innovative Popwins mechanic has become a big favourite of slots players so we’re excited to be able to add another title to our ever-expanding YG Masters portfolio,” said Yggdrasil head of partner programs Stuart McCarthy. “BountyPop is a thrilling new game with stunning visuals, immersive gameplay and a mind-boggling number of ways to win. It further strengthens our YG Masters program and is more evidence of how well our partnership with AvatarUX is working.

“Partnering up through GATI, our ground-breaking game publishing technology, has granted Avatar UX unprecedented speed to market allowing them to release BountyPop hot on the heels of the hugely successful October release CherryPop.”

“Progressive jackpots don’t come any bigger than Mega Moolah, and it’s exciting to be able to offer our players our very own unique version of a classic game,” said Kindred Group head of casino David Robertson. “It’s a testament to Microgaming that even with the sheer scale of their network they can provide bespoke games exclusively tailor-made for individual operators.”

Microgaming director of games Andrew Booth added: “What we like about Jungle Mega Moolah is that it’s completely unique to Kindred Group Casino but also linked up to a huge progressive network that serves hundreds of thousands of players. As well as supplying the biggest portfolio of the best games, we pride ourselves on offering our operators unique and different experiences for their players.”

Evoplay Entertainment is taking players to the magical forest of Winland in its latest slot release Tree of Light.

“We are delighted to unveil Tree of Light, a fun-filled journey through the enchanted forests of Winland, where lovable companions, immersive gameplay features and a chance to bag amazing rewards awaits prize-hungry explorers," said Evoplay Entertainment CEO Ivan Kravchuk.

“The title marks a fantastic addition to our coveted portfolio, which undoubtedly merits the host of plaudits it has received from across our industry. With the launch of a widely anticipated new product on our agenda for 2021, as well as continued commercial expansion, we’re set for another exciting year.”

“We are delighted to unveil Dice of Mystery, the latest addition to a riveting in-house gaming suite which has won plaudits from players of every experience level,” said GAMING1 chief operating officer Sylvain Boniver.

“The highly original Ancient-Egyptian inspired dice game is jam-packed with exciting features, including the WILD dice and an intriguing mystery round.”

Wazdan has launched the latest game to feature its new Multiways mechanic with the release of 5x3 slot Gem Splitter.

“We aim to develop diverse and engaging content with every new slot release, and Gem Splitter yet again pushes the boundaries of enjoyment,” said Wazdan head of sales Andrzej Hyla. “With the Multiways mechanic ensuring any spin has huge win potential and an immersive theme, we’re very excited to add this to our portfolio.

“Our offering continues to provide content to players of all demographics and tastes and we can’t wait to see how this is received by our fans across the world.”

“This festive edition of our hit-title will bring Christmas joy to players around the world,” said Kalamba Games chief operating officer and co-founder Alex Cohen. “With all the features that players have got to know and love but with added Christmas sparkle, this title is a great addition to operator’s lobbies during this most wonderful time of the year.”

Gamzix has expanded its slot portfolio with the launch of two new games this week, Burning Power and Hot Life.

True Lab has launched its latest slot Crazy Mix, a 5x3 fruit-themed game which sees a happy surfer and his girlfriend gathering fruits for a perfect cocktail in a tropical paradise.

“This title is really funny and refreshing, making use of both its amazing visuals and admirable bonus features we’ve come up with,” said True Lab chief business development officer Vasily Polynov. “I think that is a very valuable addition to the True Lab’s games suite, and we have big plans for promoting this game with our partners.”