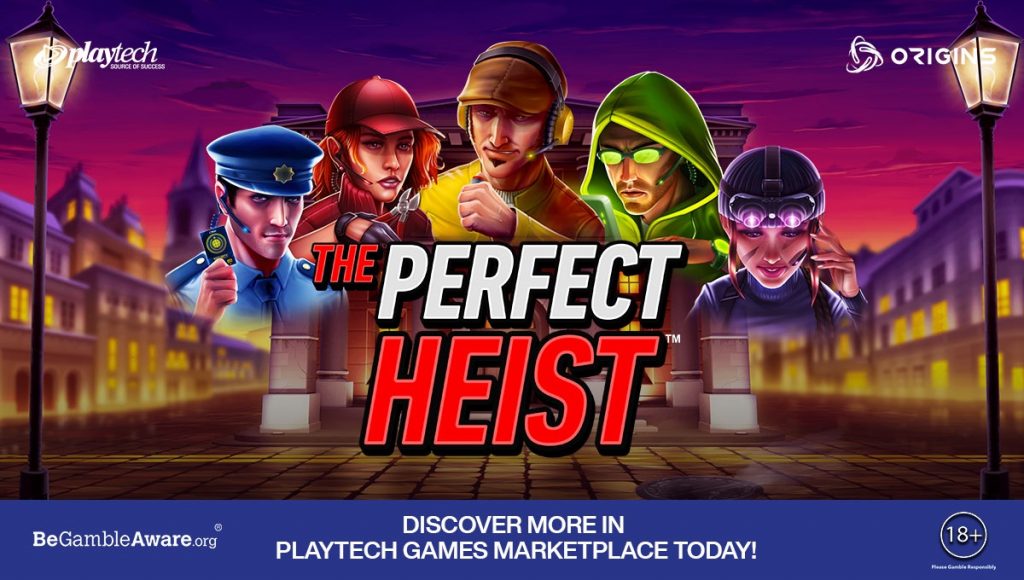 “With stylish graphics, an atmospheric soundtrack and a distinct set of characters, The Perfect Heist has an almost movie-like feel to it,” said Origins head of content unit Eran Gilboa. “With each character bringing his or her own feature to the table, and the possibility of much bigger wins when the features combine, we’re confident this is a slot that can appeal to a big audience.

“For gamers and those in search of compelling, feature-rich gameplay, The Perfect Heist will be the perfect fit.”

Players must land six pearls to trigger the Fire Blaze Hold & Respin feature, which sees each pearl award a prize.

“Pearls Pearls Pearls has everything that’s made Fire Blaze into one of Playtech’s most popular game brands - an engaging theme, feature-rich gameplay, and of course, the chance of a shot at the Grand in the famous Hold and Respin round,” said Rarestone chief operating officer James Stewart.

“The first game to launch under the new Fire Blaze Classics brand, Pearls Pearls Pearls will not only appeal to regular Fire Blaze players, but is also the perfect way to attract newcomers to the series.”

Pragmatic Play has expanded its slot portfolio with the release of a new 5x4 slot, Voodoo Magic.

The base game includes several modifiers to add to the immersive experience, such as Fortune Hex, which sees all low paying symbols removed from the reels and any winning paylines removed, with tumbling wins occurring until no more payouts are possible.

“With the nights darker than ever in the middle of winter, we’ve offered a creepy adventure in our latest title, Voodoo Magic, to keep players on the edge of their seats,” said Pragmatic Play chief business development officer Yossi Barzely.

“Packed full of modifiers and features, players will enter the world of Voodoo in the hopes of leaving with plenty of enchanted riches.”

The first slot release of the year from Skywind Group takes players to Ancient Egypt in Book of Gems Megaways.

“Book of Gems Megaways brings together a classic theme and a great game mechanic to create a fun slot for the treasure hunter in all of us,” said Skywind Group vice president of operations and content Uri Cohen.

Evoplay Entertainment has unveiled its latest 3D slot game with the release of Treasure Mania, which features the Spinential mechanic.

“With stunning visuals and thrilling gameplay, we’re sure players will love the fun-filled adventure provided by our latest slot, Treasure Mania,” said Evoplay Entertainment CEO Ivan Kravchuk. “There’s a stack of exciting features and a wealth of riches waiting to be discovered - just make sure you keep them safely tucked away from that pesky goblin.

“We look forward to launching yet more thrilling releases in the year to come, and fun-loving players should keep a lookout for our 2021 flagship title.”

Blueprint Gaming has unveiled the fifth edition of its popular Ancient Egyptian game Eye of Horus, with the latest version featuring the studio's Power 4 Slots mechanic.

“We are really starting 2021 with a bang and giving players a new variant of Eye of Horus, one of the standout brands from our portfolio over the previous year,” said Blueprint Gaming director of marketing and relationships Jo Purvis. “Players have really resonated with our Power 4 slots™ concept and introducing four reel windows to the Eye of Horus family of titles will help drive even more interest in this hugely popular brand.

“As we step into the new year our aim for the next 12 months is to maintain the great momentum which we created throughout 2020. Developing entertaining games which operators want and which players love to play.”

“Bar-X 7even completes a fantastic collection of games that have become staples of our portfolio over the last six months, achieving a stickiness that is often hard to gain,” said Realistic Games commercial director Robert Lee.

“The level of retention we’ve experienced is testament to the reputation of Electrocoin’s slots and also the talent of our studio. It’s a joy to see players able to continue to enjoy Bar-X 7even in the online world and I’m sure they will for a long time to come.”

Electrocoin president Gabino Stergides said: “Bar-X 7even turned the volatility and payout potential up a notch when it was first released, making it a game that packs a real punch for those looking for a more intense experience.

“Realistic’s online version captures this high level of excitement and we’re expecting the game to continue the success of the portfolio with players across all verticals.”

Play'n GO has expanded its slot portfolio with the launch of Coils of Cash.

"We have continued to go from strength to strength, giving us more opportunities to create top tier titles for our partners and extend our brand of entertainment to as many players around the world as possible,” said Play'n GO CEO Johan Törnqvist.

“This year we will continue to produce innovative games for the industry while exploring new territories and new ways to create better gaming experiences.”

Microgaming’s Shamrock Holmes Megaways and Wild West for The Bounty

Microgaming has launched two new games from its independent studio partners, Shamrock Holmes Megaways from All41 Studios and Wild West for The Bounty from Snowborn Games.

Shamrock Holmes Megaways is a six-reel slot with a big max payout, featuring the famous leprechaun detective. It is the first of two Microgaming-exclusive releases from All41 Studios this month to employ the Megaways mechanic licensed from Big Time Gaming.

Wild West for The Bounty is a Spaghetti Western adventure where the reels are populated with the mugshots of various desperados. It is the player’s job, as the nameless bounty hunter, to track down the bad guys and collect six matching wanted posters to win the jackpot.