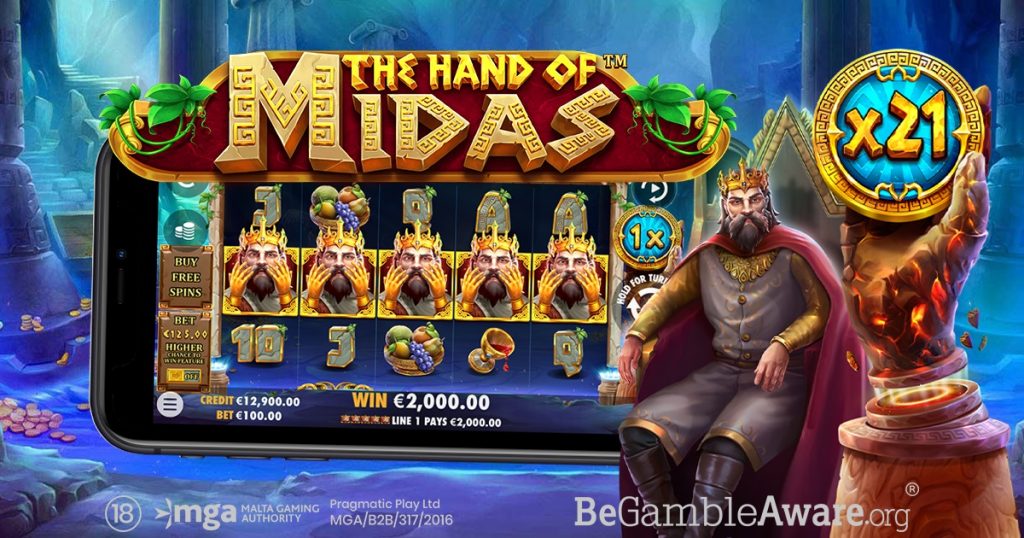 Pragmatic Play's The Hand of Midas

Pragmatic Play is taking players to a mysterious ancient temple in its latest slot release The Hand of Midas.

The 5x3, highly volatile slot is played out in the shadow of an ancient temple, with the King Midas symbol paying anywhere between two and twenty times a player’s total stake.

The Free Spins mode is triggered if three or more Scatters land on the reels, awarding a random number of free spins.

"The Hand of Midas takes players to the land of the greedy Greek character as they look to help relieve him of his wealth on the reels," said Pragmatic Play chief business development officer Yossi Barzely.

"Our exclusive portfolio of slot games continues to grow every month, and new titles such as The Hand of Midas allow us to reach even more players and create more engaging content for them."

Pragmatic Play’s Eye of the Storm

The 3x5 slot is the latest title developed in partnership with Reel Kingdom and sees players searching for the Queen’s treasure among the mysterious temples as a dangerous storm looms upon the reels.

The gameplay features the use of ancient artefacts on the reel symbols, with the Eye of Ra symbol being the most rewarding, paying 10, 20 or 50 times a player’s stake for three, four or five in combination.

“Eye of the Storm is another fantastic addition to our offering in partnership with Reel Kingdom,” said Pragmatic Play chief business development officer Yossi Barzely. “With alluring gameplay and a host of bonus features unique to this title, this title really brings something new to our library of premium slots. We expect it to go down a treat with our players.”

Continuing its hot streak, Pragmatic Play has also debuted its Mega Roulette game with a number of Latin American-facing operators, ahead of the game’s official launch later this month.

The supplier’s latest live casino game will go live exclusively with Bplay in Argentina, Bplay Paraguay, SellatuParley in Venezuela, and BetConnections across different markets in the region.

Mega Roulette takes the classic roulette experience and adds innovative features to gameplay. Up to five multipliers can be randomly applied to straight-up bets on every spin, with these multipliers awarding up to 500x.

“Mega Roulette is one of our most anticipated product launches of the year and we’re delighted to roll it out with some of our most valued Latin American operator partners,” said Pragmatic Play vice president of Latin America Victor Arias.

“Its engaging gameplay and phenomenal win potential makes the game stand out even among our own portfolio and we’re delighted with it. We can’t wait to see how it’s received by Live Casino fans across the continent.”

“Mighty Joker Arcade is a thrilling classic slot that hits the highest possible production value while also providing players with plenty of chance to land big wins in the base game, top game and via the progressive jackpot,” said Stakelogic CEO Stephan van den Oetelaar.

“We believe Mighty Joker Arcade will appeal to fans of classic slots in markets around the world and deliver the thrilling and exciting experience they are seeking each time they spin the reels and watch the fruit, bell and Joker symbols tumble.”

Inspired Entertainment has expanded its slot portfolio with the launch of five-reel game Temple of Light.

“With its vivid and eye-catching graphics and adventure-themed imagery, Temple of Light and its player choice bonus round will thrill players while the base game with its random multipliers and expanding wilds will keep players invigorated and highly entertained throughout,” said Inspired vice president of interactive Claire Osborne. “It makes a fantastic addition to our growing portfolio of highly engaging games content.”

“Bounty Belles sees players hunting the reels for our fearless female outlaws and the massive rewards that follow them,” said iSoftBet head of games Mark Claxton. “With innovative features and expanding reels to significantly increase the paylines, any spin can lead to players being awarded the significant bounty on their heads.”

“Clover Lady takes a fun-filled, familiar theme and adds a thrilling adventure twist,” said Wazdan chief commercial officer Andrzej Hyla. "With direwolves increasing multipliers every time they land on the reels, players will be keeping an eager eye out for these majestic creatures.

“Our players enjoyed the Hold the Jackpot bonus in our previous release, Unicorn Reels, with huge Jackpots up for grabs. In Clover Lady we’ve taken it to a new level by adding multipliers to the Jackpots. We can’t wait to see how Clover Lady is received by our fans across the globe as they Hold the Jackpot.”

Ahead of Valentines Day on Sunday, Endorphina has launched a new 5x3, 20 payline slot Cupid.

“Endorphina decided to make this Valentine’s Day unforgettable,” said Endorphina head of sales Kirill Miroshnichenko. “I’m so happy to announce our new title - Cupid. No matter if you are single or in a relationship, our Cupid will be a good companion for you.”