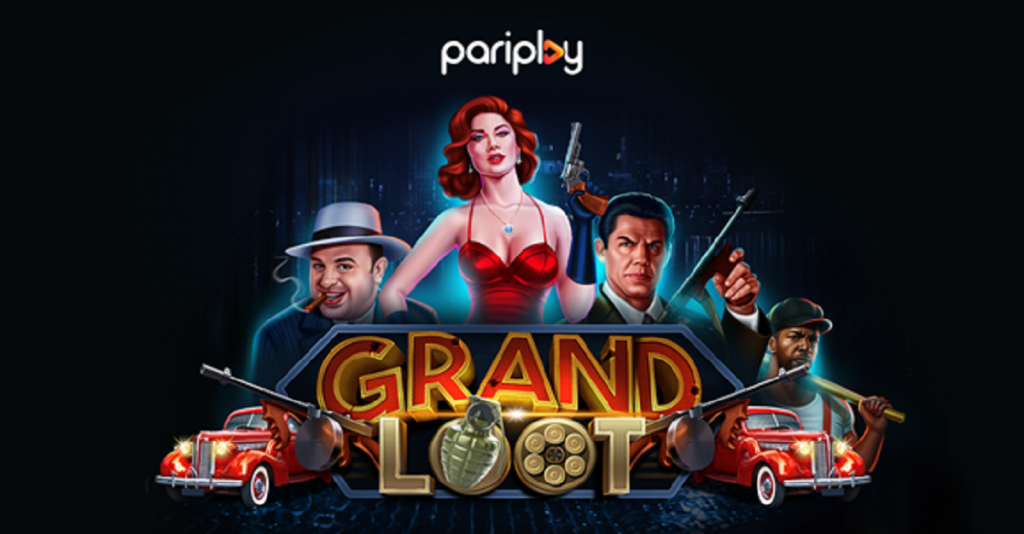 Pariplay is taking players back to early 1920s with its latest slot release Grand Loot.

The 5-row, 4-reel slot has 40 pay lines and includes a number of special features such as the Grand Loot Bonus, which rewards players with Free Spins and Special Symbols.

“By centering Grand Loot on the theme of getting away with the perfect robbery and becoming rich, Pariplay has created an exciting and memorable gameplay experience, that harkens to an intriguing time when gangsters ruled the cities,” said Pariplay chief commercial officer Christine Lewis.

“This theme supports a variety of rewarding special features, including huge multipliers, special symbols and the Grand Loot Bonus.”

Pragmatic Play is taking players to Ancient Greece with its latest slot release Gates of Olympus.

The 5×6 slot features 20 paylines for winning combinations to land on and a ‘Pay Anywhere’ system that pays out on clusters of eight or more.

The bonus round is triggered by landing four or more Zeus Scatter symbols, with the multiplier increasing respectively with the appearance of more Scatters. Players will then be granted 15 Free Spins, with all multiplier symbols they land being added to the progressive global multiplier.

“Gates of Olympus is the latest Pragmatic Play title to draw influence from Greek mythology, and it looks likely to be our strongest yet,” said Pragmatic Play chief business development officer Yossi Barzely. “With alluring gameplay and unique systems at play, the ‘Pays Anywhere’ function adds a whole new dynamic to the game. We expect our players across the globe to really enjoy this addition.”

Evolution-owned NetEnt has debuted its Divine Fortune Megaways slot in the United States for the first time, going live with licensed operators in New Jersey and Pennsylvania.

NetEnt has taken one of its most successful game releases of 2020 and added the popular random reel-modifying Megaways mechanic.

The 6-reel mythical-themed slot includes the same magical creatures and glittering coin symbols as the original Divine Fortune game, but this time loaded with 117,649 Megaways to win with a maximum win of 4,502x stake.

It marks the supplier’s second Megaways launch in the United States following the release of Twin Spin Megaways in January.

“We’re excited to have brought our Megaways collaboration to the US,” said Jeff Millar, Evolution commercial director, North America. “Aligning our top titles with the iconic Megaways feature brings something totally new to the US market.

“Twin Spin Megaways, has been firmly embraced by players and I’m sure we’ll see the same with Divine Fortune Megaways. And there’s plenty more to look forward to - we’ve got a packed roadmap of releases across Michigan, New Jersey, Pennsylvania and West Virginia.”

The new game is an update to the supplier’s popular Cops ‘n’ Robbers slot series, where players must once again help Bert stay one step ahead of the law as he takes the Vegas nightlight by storm across 5 reels with 20 win lines, and a swag bag full of features.

The slot comes with four reel modifiers, each with their own unique trait to increase winning potential. In addition to this, Bert also has four bonuses up his sleeve to make getting away with the loot even easier.

BF Games has launched Stunning 27 Remastered, a revamped version of its popular 3x3 slot and the fourth game to be released as part of its Remastered series.

“The enduring appeal of Stunning 27 Remastered lies within its big win potential and the simplicity at the heart of its design,” said BF Games CEO Piotr Szpoton. “While there is a place in the industry for complex new mechanics, within the Remastered series we are focusing on giving players what they know and love, while also adding extra sparkle through a slick and modern refresh of the overall presentation.”

Stakelogic is taking players down the rabbit hole in its latest slot release Wonderland Wilds.

The slot offers up a range of bonuses, including Sticky, Added and Transformed Wilds, Stacked Symbols, a Double Win Multiplier and Free Spins.

“Wonderland Wilds is our most visually striking slot to date and the design team has done an incredible job at creating a bold, vibrant and engaging backdrop to the game,” said Stakelogic CEO Stephan van den Oetelaar. “Of course, this is matched by the math and mechanics that ensure Wonderland Wilds delivers a thrilling and exciting player experience. This has been achieved through the wide range of bonus features that can be triggered during the game.

“This combination of striking design and immersive gameplay is what we have built our formidable reputation on, and Wonderland Wilds certainly has what it takes to become one of our most successful games to date.”

“The Golden Sail takes players on a thrilling high seas adventure, combining explosive gameplay and a trove of bonus features,” said Silverback Gaming founder and CEO Raphael Di Guisto. “The team has also done an incredible job when it comes to the design of the game, which is bold and striking, as well as the sound which comes together to create a truly immersive experience.

“We are thrilled to be launching The Golden Sail with our friends at Relax Gaming and can’t wait to see players heave ho, hoist the mizzen and win big.”

Relax Gaming chief product officer Simon Hammon added: “With Silver Bullet we have curated a portfolio of highly entertaining and thrilling slot games, and The Golden Sail is a great addition. We look forward to launching it to our operator partners and believe it will be a big hit with players in markets around the world.”

“Partnering with Blueprint Gaming for the development of this unique game is another important step to broaden the appeal of the sport to more people across the globe,” said PDC chairman Barry Hearn. “They have a fantastic reputation within the gaming industry for developing high quality content and we had no hesitation in partnering with Blueprint for this special game release.”

Blueprint Gaming director of marketing and relationships Jo Purvis said: “Get ready for some quality darts action as we unveil PDC World Darts Championship as the first standout release from the Blueprint portfolio this year. Featuring the sport’s biggest and most recognisable characters, we’re offering an entertaining experience, backed by a proven casino format that will resonate with a large audience.”

Spearhead Studios has expanded its portfolio with the launch of Ancient Egypt-themed slot Blue Diamond Book.

“Not only does it look and sound amazing, but Blue Diamond Book’s free spins feature is incredibly exciting,” said Spearhead Studios game development director Kevin Corti. “We have already got compelling, early data that tells us that Blue Diamond Book is a game that is going to amaze players and we’re thrilled to release it to the market.”

Habanero is taking players on a dive into the deep sea in its latest slot Orbs of Atlantis.

“Get your scuba gear and treasure maps ready, because we’re ready to take players the world over to a legendary ancient kingdom in an adventure that’s sure to delight audiences everywhere,” said Habanero head of corporate communications Toni Karapetrov.

“Beautifully designed to bring the legendary riches of Atlantis to life like never before, we’re delighted to be delivering a host of added features, including our Big Reels and Buy Feature - ensuring that we’ve got a completely customisable gameplay experience for every type of player.”

“Lord Fortune takes a thrilling Asian theme and adds our dynamic Hold and Win mechanics to create a truly unforgettable gaming experience,” said Booongo head of account management and business development Yuriy Muratov. “Our portfolio continues to add enviable depth and we can’t wait to see how this game is received by our fans worldwide.”

“Dragon Fury provides the ultimate martial arts-inspired getaway for players looking for an adventure,” said GAMING1 chief operating officer Sylvain Boniver. “With captivating gameplay and bonus features unique to this title, it really brings something new to our library of premium slots.

“We expect it to go down a treat with our customers, and with a number of exciting launches still in the pipeline for 2021, we hope to carry this momentum into the months ahead.”

“We are delighted to start the show with Fortune Finder with Sarati, our first money-wheel title, which offers the unique, engaging and highly entertaining player experience for which we are becoming well known,” said Real Dealer Studios chief product officer Shane Cotter. “Our games are designed to be different from standard studio-based live dealer games, providing a seamless experience that is authentic, immersive and hugely rewarding from the first game round to the last.

“We can’t wait to see Fortune Finder games land in operator lobbies and for players to enjoy the superior experience that these games and our other titles have to offer.”

“We’re extremely pleased to add Red Hot Gambler to our portfolio, the game offers our partners a more traditional slot with huge potential,” said Realistic Games commercial director Robert Lee. “Players are going to love it too, with the extra Red Hot Bonus reel and flame assisted wins, it’s sure to fire up their excitement.”

Realistic Games has also this week launched updated versions of two of its most popular games, Keno and Hi Lo Gambler.

“Keno and Hi Lo Gambler have always been among our top-performing casino-style games,” said Lee. “The fact that we’re continuing to update our classics to make them more accessible to today’s players is testament to their longevity.

“We’ve done the same with the rest of our collection and the new versions were well-received by our customers, so we are confident that these final two will go down equally as well.”

BGaming has expanded its portfolio with the launch of a new 5x3 slot, Four Lucky Diamonds.

“It’s the first time for BGaming to use gemstone symbols in its slots,” said BGaming project manager Yulia Aliakseyeva. “We wanted to make something traditional but with a special charm. The game has bright and attractive visual and sound effects. Besides great features like Lucky Spins, there is also a very interesting detail in the slot. A player can see possible winning combinations before the reels completely stop.”

iSoftBet has released the sequel to its debut Megaways game with the launch of Aztec Gold Extra Gold Megaways.

“Our latest hit takes players back to where our Megaways adventure began, in the heart of the Aztec lands, but where fans of the original can enjoy Extra Gold,” said iSoftBet head of games Mark Claxton. “With a thrilling Hold & Win bonus round, more chances to win than ever before and all the fun of a Megaways title, we can’t wait to see how fans react to the sequel.”

Set for launch in early March, the game embraces the four elemental symbols earth, wind, fire, and water, and will be initially released via Relax Gaming’s Silver Bullet platform.

“I am super exited to be back with a game again and I am hopeful that the players will love this entertaining and graceful slot that I have created with Fantasma,” said Westerlund. “It has been great fun to develop Elemento and Fantasma has a small, yet creative, team with high ambitions. Watch this space because Fantasma is packed full of potential.”

Fantasma Games founder Fredrik Johansson added: “Elemento is a real team effort and is a fantastic example of the type of content we can produce when collaboration is embraced. Mats knowledge and understanding of slot creation is unparalleled and this has resulted in a thrilling game that delivers an exceptional player experience which will entertain players from their very first spin.”