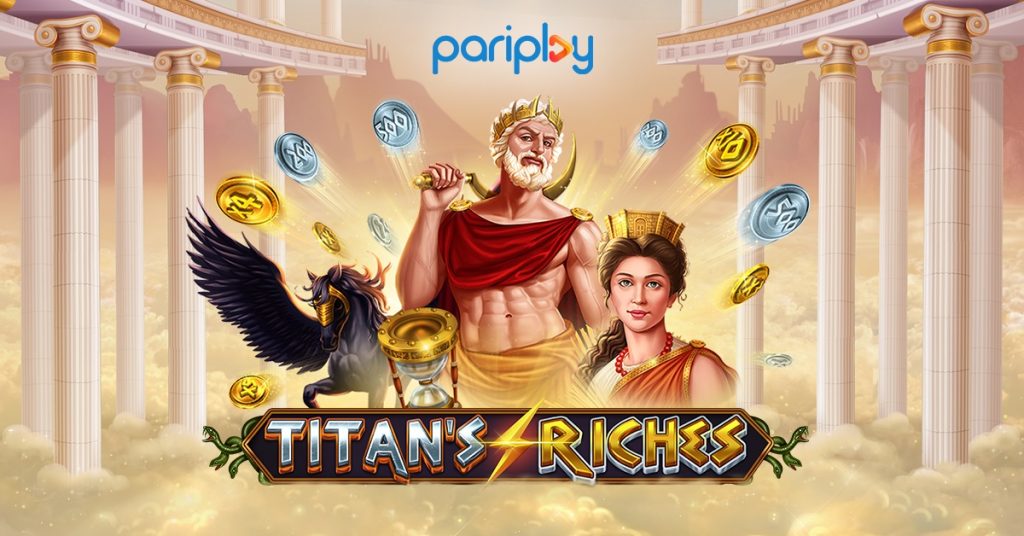 Set in a sacred place where Titans once ruled the world, players can rack up wins through the Descending Wild Respins, which are triggered every time a Wild appears on the reels.

“Titan’s Riches is a lavish, action-packed adventure that will appeal to treasure-seekers everywhere,” said Pariplay chief commercial officer Christine Lewis. “With its sumptuous presentation and rich rewards, players can enjoy a heavenly experience should they manage to land an alluring prize within the Titan’s Riches feature.”

The game features numerous modifiers in the base game, with Wild modifiers occurring, containing multipliers of up to 100x, while it’s also possible to land the Super Modifier, which can guarantee a Max win.

The Free Spins Round is triggered by three or more scatters landing, with players selecting a mode to enter. Players can then also climb the levels of the Bonus Round, up to the 4th level, where more Wild multipliers are available.

“Our slot portfolio continues to grow with innovative content, and we’re delighted to roll out the multiplier-filled Wild Booster,” said Pragmatic Play chief business development officer Yossi Barzely. “We are always looking to create engagement for players of all tastes and preferences and are eager to see how players respond to this game.”

Skywind Group has enhanced its popular Joker’s Luck slot game with a number of new features.

“Fishing Cash Pots is a fun and upbeat slot game that casual slot players, with all budgets, can enjoy,” said Inspired vice president of interactive Claire Osborne. “It’s a great addition to our Cash Pots range of interactive slot games.

“The game’s crystal-clear blue waters and colourful symbols will transport players to an exciting world of deep-sea fishing. We’re pleased to be adding Fishing Cash Pots to our growing portfolio of diverse content that meets multiple player tastes, styles and preferences.”

“Initially created for players based in Germany, our groundbreaking new ‘Double Hit’ concept is an exhilarating addition to our portfolio for gamers across the globe,” said Playson head of product Vsevolod Lapin. “We look forward to incorporating the mechanic in future game releases, and have no doubt that 3 Fruits Win: Double Hit will prove popular in a wide range of international markets.”

BGaming has announced the release of its latest slot game Mechanical Clover.

“Thinking of the idea for a new slot, we were inspired by Mechanical Orange, the game that was released two years ago,” said BGaming art director Aleksey Ulanov. “It was the first game in the steampunk style in our lineup and it definitely deserved a follow-up.

“That’s how we made the new Mechanical Clover slot. The steampunk style is very interesting for its great details. Thinking over the elements of the game, we immediately came up with interesting mechanics for animations.”

iSoftBet has announced the network-wide release of its first Cluster Pays title, the pirate-themed Sea of Riches.

“We’ve introduced our first ever Cluster Pays game, adding a completely new engaging mechanic to our slot offering,” said iSoftBet head of games Mark Claxton. “Sea of Riches also combines several collect and win features to give players an immersive and exciting gaming experience. As we look to expand our portfolio further creating innovative titles is key, so we’re thrilled to launch this slot.

“Our offering continues to broaden its appeal to more players than ever and we’re enjoying a strong commercial year so far driven by our games’ excellent performance.”