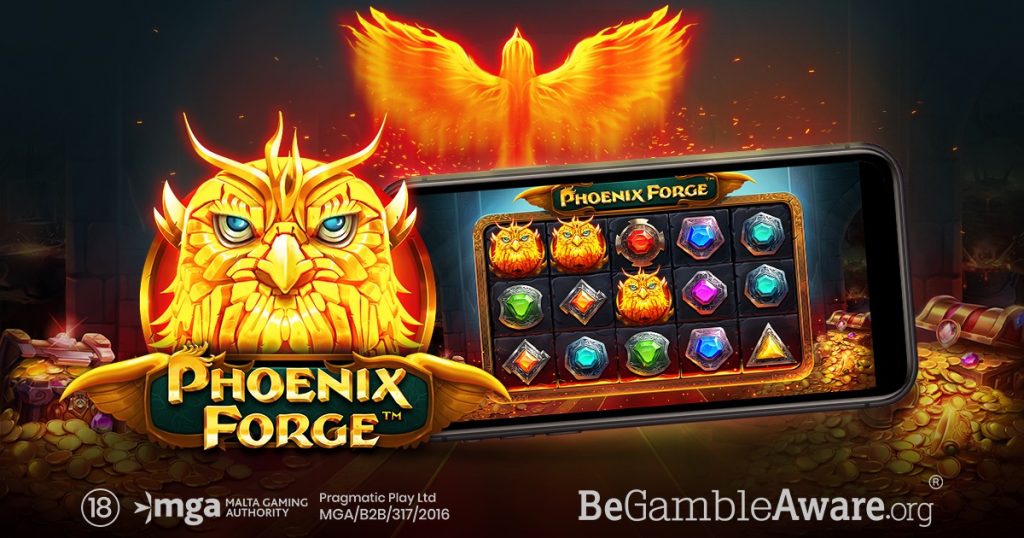 Pragmatic Play is taking players on a quest for mystical riches in its latest slot release Phoenix Forge.

“Phoenix Forge takes a classic slot experience and adds tumbling wins to a 5x3 grid, as well as increasing multipliers for every successful cascade,” said Pragmatic Play chief business development officer Yossi Barzely. “Wins can be fast, furious, and huge in size and we’re delighted with our newest hit. We can’t wait to see how it is received by fans all over the world.”

“Phoenix Kingdom offers a gaming experience full of mystery and magic,” said Pariplay chief commercial officer Christine Lewis. “While we are sure the slick presentation and intriguing theme will prove a hit with players, the game’s features are the true star of the show.

“With red-hot prizes on offer when the Jackpot Wheel lands, this is a slot that is sure to appeal to the adventurous.”

Wazdan is rolling out its new 'Hold the Jackpot' feature in the upcoming slot release, Midnight in Tokyo.

Following the debut of the new mechanic on its Unicorn Reels, Clover Lady, Burning Stars 3 and Sun of Fortune games, Wazdan will offer Hold the Jackpot on three new upcoming releases; Midnight in Tokyo, Prosperity Pearls and Fortune Reels.

In Midnight in Tokyo , the Hold the Jackpot bonus round will be played on 15 mini reels. Players will be able to win both Major and Grand Jackpots, triggered by Geisha symbols, as well as additional cash prizes from Moon symbols.

“Our Hold the Jackpot products have been hugely well-received, and we’re delighted to add more of them to our roadmap, as they provide the unmistakable flavor that many players seek,” said Wazdan chief commercial officer Andrzej Hyla.

Stakelogic has teamed up with Greenlogic partner Hurricane Games to launch its latest slot Ultra Joker.

“Ultra Joker is a great addition to our classic slot portfolio thanks to its strong design and highly entertaining gameplay,” said Stakelogic head of Greenlogic Salvatore Campione. “You can feel the big win anticipation build with every spin, and thanks to the wilds and multipliers, big wins are very much on the cards with this slot.

“It was a pleasure to work with Hurricane Games which consists of a highly talented team of designers and developers who came together to build and launch a truly great slot.”

“We were delighted to partner with Warner Bros. Consumer Products,” said 888 vice president of B2C Talya Benyamini. “Section8, our in-house games studio, did a fantastic job capturing the spirit of the movie and delivering the same exhilarating energy to the slot reels with top-notch graphics and innovative features.”

iSoftBet has released Gem Roulette, a new game based on the American Wheel version of the classic land-based game.

“Gem Roulette takes a casino classic and adds innovative and lucrative bonus with Gem Bet giving players even more ways to win,” said iSoftBet head of games Mark Claxton. “We’re always looking for ways to expand our portfolio and we’re very pleased with our latest addition that provides roulette players with a unique twist to the iconic table game.”

“Sharks never stop swimming and Videoslots never stops looking for great games, so this Savage Shark felt like the right fit for us,” said Videoslots head of commercials William Ahlberg. “It’s a theme that never fails to capture the player’s imagination and it’s a thrill to get our hands on one of Leander Studios’ highly effective games first.”

Blueprint Gaming has added its Diamond Mine Megaways title to its Jackpot King progressive system.

“Diamond Mine Megaways is one of our most successful games and will undoubtedly prove to be a valuable addition to Jackpot King,” said Blueprint Gaming director of key accounts and marketing UK Jo Purvis.

“The action-packed slot already has a strong fan base and incorporating our industry-renowned progressive jackpot functionality will amplify the excitement to new heights, knowing they could become a millionaire off any spin.”

“Book of Giza Gold is an online scratchcard which really comes to life,” said Design Works Gaming chief technical officer Brant Frazee. “We’ve built two pioneering features on top of the regular gameplay to add a sense of adventure and mystery befitting of the great pyramids.

“The game is now available to licensed operators in the UK, where we have found that our modern take on the online scratchcard has proven extremely popular with players.”

FunFair Games’ AstroBoomers: To the Moon!

FunFair Games has announced the network-wide launch of its new multiplayer title, AstroBoomers: To the Moon!

Following an exclusive debut with Betsson, the game has now gone live through an integration with EveryMatrix’s RGS Matrix platform.

“We are thrilled to announce the network-wide rocket-launch of our exhilarating debut game, AstroBoomers: To the Moon,” said FunFair Games chief operating officer Lloyd Purser.

“The absorbing crash title takes gamblers on an interactive adventure which is simple yet compelling, showcasing the community-driven experiences demanded by a new generation of players who are turning away from passive slot gameplay. We are confident that it will continue to prove hugely popular.”