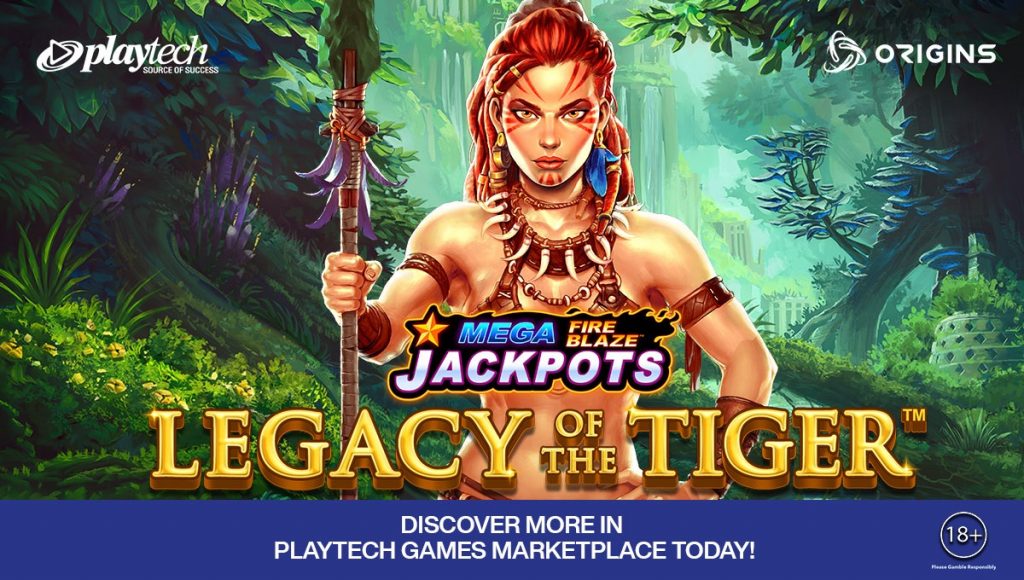 Playtech’s Legacy of the Tiger

Legacy of the Tiger is a 3x5 slot featuring growing reels which expand and award better multipliers during the Mega Fire Blaze feature.

“We are very excited with the release of the first game in our new Mega Fire Blaze Jackpots suite - Legacy of the Tiger,” said Yehonatan Tishler, game producer for Origins. “Mega Fire Blaze features growing reels which expand and may award up to 45 cash prizes and Jackpots.

“Unlock the top rows for huge wins with big multipliers and special Jackpot feature. In the Free Games, to make it even more exciting, the middle reel features wild or fire blaze symbols only. I am confident players will enjoy playing it as much as we did creating it.”

Players aim to collect a stack of three Bonus Coin symbols to trigger the Free Spins round. During the Hold and Spin round, Silver Coins have a value of between 1-9x a player’s stake, and Gold Coins can pay out up to x20 the bet.

“Ultra Hold and Spin is another exciting addition to our slot offering, giving players the chance to stack up big piles of Coins on the reels,” said Pragmatic Play chief commercial officer Melissa Summerfield. “We continue to look for ways to enhance our offering and our partnership with Reel Kingdom has added a unique edge to our portfolio.”

“4ThePlayer.com is all about innovating to improve the entertainment experience. In this release we are extremely excited to say we have done exactly that with our new feature Dual Spin, giving the player choice and the chance to double their win on every spin, not forgetting a bonus round with guaranteed wins and an increasing multiplier,” said 4ThePlayer.com CEO Andrew Porter.

GVC’s Philip Manning added: “We believe our players will be really excited to play 2 Gods Zeus vs Thor and are very pleased to have the first to market release of the game. It’s packed with innovation, a highly interactive game with immense graphics and  sure to give a thundering player experience.”

“Obviously as a game studio it is rather cliché to use the classic Irish luck theme in a game,” said RubyPlay chief operating officer Ittai Zur. “But, we think that by using our unique Shake Shake game mechanic in Shake Shake Leprechaun it adds a really exciting twist to the game play. We had great fun creating the game, and we hope our players love it as well.”

EveryMatrix-owned Spearhead Studios has launched German-themed slot Teutoburg, a new game based on the Battle of Teutoburg Forest which took place in the 9th century.

“We put a lot of time and effort into perfecting the math model to ensure that the features delivered real excitement and player value,” said Spearhead Studios game development director Kevin Corti. “Our creative team strove to create engaging visual effects and a rousing soundscape, to compliment both the game's features and to fit with the historical theme we had chosen.”

Blueprint Gaming has expanded its popular Jackpot King series of games with the addition of Buffalo Rising Megaways.

“The charge is on as Buffalo Rising Megaways makes its welcome entry to our series of Jackpot King titles,” said Blueprint Gaming director of marketing and relationships Jo Purvis. “The original title with its cascading reels and classic theme proved to be very popular with a wide range of players.

“We’re fully expecting this latest Jackpot King version to resonate with a new audience, as has been the case with a number of existing titles that now feature the leading progressive jackpot system.”

Nolimit City has released its latest slot title Buffalo Hunter, inspired by the great American plains of the wild west.

“We all stand in awe when we face the incredible buffalo and we wanted to make our tribute to the mighty beast as well,” said Nolimit City product owner Per Lindheimer. “With Buffalo Hunter we placed the animal at the center stage as it grants the player big pay-offs.”

OneTouch has announced the launch of its latest slot Flexing Dragons.

“Offering fire-breathing symbols, exhilarating in-game features and a red-hot shot at winning scorching cash prizes, Flexing Dragons is a slot not to be missed,” said OneTouch head of marketing Ollie Castleman. “The smouldering release kicks off an exciting hot streak here at OneTouch, with further innovative launches in our pipeline for the near future.”