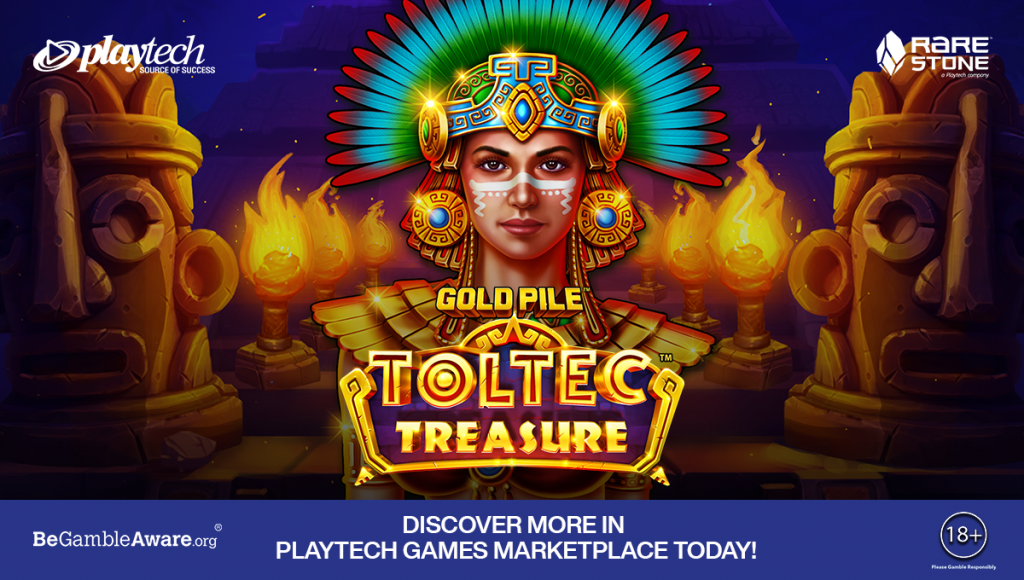 Playtech’s Rarestone studio has released the first game in its new Gold Pile series of games with the launch of Gold Pile: Toltec Treasure.

“With its unique Gold Meter feature, Toltec Treasure puts the power in the players’ hands, allowing them to determine their chance of landing a Gold symbol - and with it, the chance of a guaranteed Mini or Maxi prize. But it’s in the Grand Chase, with three chances to win the Grand Prize, where the excitement really ramps up for players in search of a major win. With a combination of a classic theme and an innovative, engaging mechanic, Toltec Treasure is a fantastic introduction to the Gold Pile suite.”

Pragmatic Play has launched its newest Asian-themed game Dragon Tiger, a 5x4, 1,024 payline slot that brings together two celestial beasts, the Dragon and the Tiger, in a duel.

With reels filled with golden creatures and a fearsome Wild symbol, players will be looking for the Dragon Tiger Bonus symbol which launches the Free Spins mode. If two or more of these symbols land during the Free Spins feature, then extra spins are awarded.

During the Bonus Feature, any Wild Symbol that lands will have a multiplier attached to it of up to 5x, with more Wilds leading to a bigger multiplier. These last for one spin, with any wins on that spin multiplied by the full amount.

Joel Zimmerman, also known as deadmau5, said of the new slot: “After performing in casinos, having a residency in Vegas, and playing so many casino games, I am thrilled to finally have a game of my own.”

Microgaming director of games Andrew Booth commented: “Joel is one of the most exciting and successful electronic music artists of all time, and his deadmau5 brand is a hit with audiences worldwide, extending far beyond its genre.

“We’re thrilled to have teamed up with Eurostar and deadmau5 to create Microgaming’s latest branded game, which has performed brilliantly during an exclusive release period with select operators.”

Blueprint Gaming added one of its most popular games, Eye of Horus, to its expanding progressive jackpot system Jackpot King.

The original Reel Time Gaming (RTG) game, which was repurposed from retail to the online slots market by Blueprint back in 2017, now features more huge prizes hidden in the ancient Egyptian tomb.

“The all-seeing eye makes a welcome entry to our Jackpot King series, which will enable players across Europe to enjoy a new way of experiencing the classic game,” said Blueprint Gaming director of marketing and relationships Jo Purvis.

“Including the hugely popular Eye of Horus brand within the progressive jackpot system significantly strengthens our offering and will open up the slot to an alternative segment of players.”

“Shining King Megaways takes a classic theme, adds the highly engaging Megaways mechanic and iSoftBet’s innovative features to create a completely unique gaming experience,” said iSoftBet head of games Mark Claxton. “The Megaways iSoftBet collaboration has produced some stunning results this year, and we have plenty more planned in 2021 so watch this space.”

“It’s not a game with sleeping beauties - but raising the dead has never been as beautiful as in Warrior Graveyard,” said Nolimit City product owner Per Lindheimer. “The xNudge mechanic really comes into fruition in this slot and creates heart raising moments, especially in the bonus modes. Any player that have played our games previously will feel right at home with Warrior Graveyard.”

RubyPlay has expanded its slot portfolio with the release of its latest 5x3 Asian-facing slot Blazing Tiger.

“Our talented design team has certainly stepped it up with the theme combining the Far East and the tiger,” said RubyPlay chief operating officer Ittai Zur. “I also love the experience of players seeing giant values symbols land on the reels, and the excitement of winning them just a moment later when the tiger paw lands on reel 5.”

BF Games has expanded its portfolio with the launch of 5x3 jewel-themed slot Royal Crown Remastered.

“Our Remastered games have been a huge success as players appreciate the familiar game play that has made our titles so popular but with a more modern look and feel,” said BF Games CEO Piotr Szpoton. “Royal Crown is one of our original games and an all-time favourite and we are excited to re-launch it with fresh new graphics.”

“Our creative ideas really flowed with the design for Book of Nile: Revenge and we’re thrilled with the results,” said NetGame Entertainment head of business development Andrey Vajdyuk. “Players will adore this Egyptian slots experience where vast riches lie for those adventurers who harness the power of the ancient book.”

“With world-class visual effects, inviting symbols such as the golden sarcophagus and immersive sounds to match, we’re confident the game will prove to be an instant hit, and we can’t wait to introduce it to players.”

“It’s rare that a casino game has such longstanding appeal but the simplicity of Super Bar-X has made it a title that has truly stood the test of time and continued to attract audiences for over four decades,” said Realistic Games commercial director Robert Lee. “We went to extreme lengths to make sure our online version was a faithful recreation of the original and it’s paid off. It’s great to see our Electrocoin portfolio continue to expand with more of these classics and we expect Super Bar-X will be another smash-hit.”

Electrocoin president Gabino Stergides added: “Super Bar-X has been a staple of bingo and arcade floors for many years with its classic gameplay and makes for just as an exciting experience in the online world. To hand it to Realistic’s team, they continue to do an incredible job of revamping these iconic Electrocoin titles and we look forward to watching the recreations continue to entertain digital players for years to come.”

The latest slot release from Gamzix is Hoonga Boonga, which takes players on a supernatural journey through an ancient jungle.

Christmas has come early at Play’n GO with the release of its latest slot Holiday Spirits, based on the famous Charles Dickens novel A Christmas Carol.

“It’s essential to pay attention to the little details when creating a game, the small touches and ideas that enrich the game,” said Play’n GO chief product officer Martin Zettergren. “This becomes even more important when basing a game on something players know and love. Be it mythology, famous characters, or a much-loved band you have to get the important elements in there, as well as adding your own touches.”