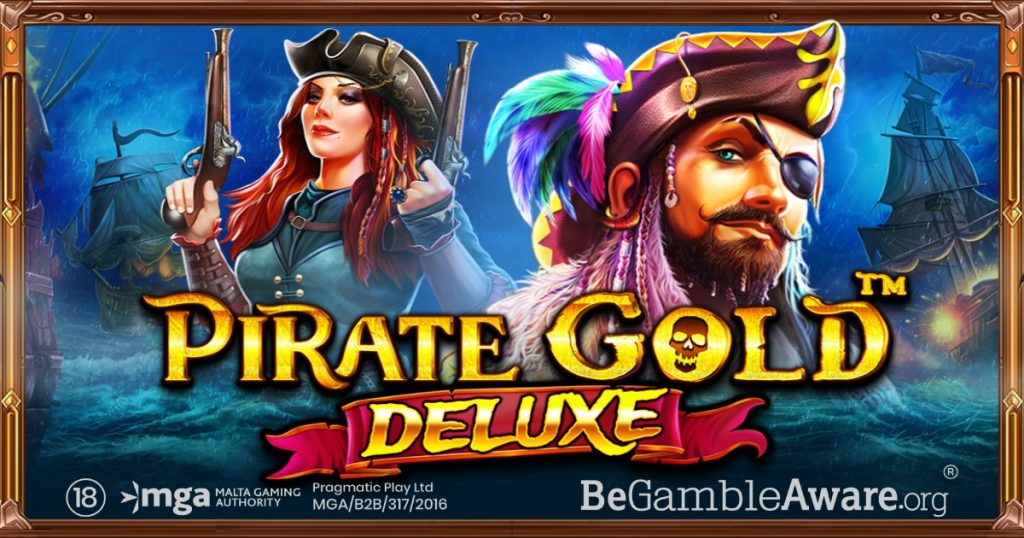 Pragmatic Play has expanded its Deluxe range of slots with the release of Pirate Gold Deluxe.

The 4x5, 40-payline slot sees the return of Pragmatic Play’s fearsome crew of pirates as they scour the seas looking for booty.

Treasure bags on the reels act as Money Symbols, with eight or more landing on the reels triggering the Re-Spin Bonus. During the Bonus Feature, all previous Money Symbols will remain on the reels while respins occur to fill up the remaining spots. Players get three respins, with the count resetting in case of a successful spin.

“Pirate Gold Deluxe invites players back onto the high seas to join our hearty crew as they hunt for treasure,” said Pragmatic Play vice president Lena Yasir. “With a fun-filled hold and win style Bonus Round, any spin could turn into a lucrative win.

“We continue to add new and innovative games to our portfolio, as well as refining current classics. Our approach to game development continues to bear fruit and we’re eager to see how Pirate Gold Deluxe is received by our fans.”

Playtech’s Ash studio has added a retro twist to this 3x5 25-line slot, with the 3D Rubik’s Cube turning symbols Wild, or into Multiplier Wilds of up to 7x if the cube is solved.

“We wanted to stay true to the iconic brand by incorporating a 3D Rubik’s Cube that twists on every spin,” said Ash games producer James Cook. “The Rubik’s Cube creates Wilds or Multiplier Wilds if symbols on the reels match the colours on the Cube.

“The Rubik’s Cube brand appeals to everyone, so we created six unlockable Free Games modes to allow players to choose a volatility that suits them. Multiplier Wilds stick to the reels in Free Games to create exciting combinations. We had a lot of fun making the game and we hope players enjoy this innovative slot with a retro twist.”

Playtech’s Origins studio has released Mega Fire Blaze Roulette, where players can spin the wheel to win prizes in this new take on the classic game of roulette.

Up to 10 numbers can light up on any spin, and if the ball lands on a lit number with a straight bet placed on it, the Mega Fire Blaze feature is triggered. This spins the bonus table for cash prizes, win multipliers and stars that award one of four jackpots each time they appear.

“Mega Fire Blaze Roulette has to be the most exciting roulette variant we’ve ever produced,” said Origins game producer Yehonatan Tishler. “Players who enjoy Classic European Roulette will love the new twist the Mega Fire Blaze features bring - and of course the chance to win up to X10,000 their bet.

“During the Mega Fire Blaze round, player can win up to 36 prizes with a multiplier boost, plus up to six Jackpots. With the Fire Blast feature giving players better the chance of triggering the bonus round, we know Mega Fire Blaze Roulette will be a compelling proposition for regular roulette players and fans of the Fire Blaze brand alike.”

Caleta Gaming has expanded its portfolio with the launch of two new games, Bingo Tornado and Viking Madness.

“We focus on building a solution that is entertaining, original, and beautiful, while backing it up with the latest technology,” said Caleta Gaming CEO Fabiola Jaeger. “We are proud of our work and strive for more in every title. "

Push Gaming looks to the ancient gods in its latest slot release Wheel of Wonders.

“Every game we deliver to operators and their players has to bring something new to the table, and Wheel of Wonders does just that,” said Push Gaming CEO James Marshall. “Created to bring about another level of entertainment in slot games, with a base game full of features that leads into a free spins feature that has huge potential - we are confident that this slot will prove to be popular among a wide range of demographics.

“Not only across a variety of markets, but especially for slots enthusiast that are looking for something new.”

Booongo has unveiled its latest slot release Beast Saga, a 5x4, 50-payline slot set in an ornate temple in the Far East.

“Creating quality diverse titles is vitally important in our design process and we’re thrilled to meet our expectations with the launch of Beast Saga,” said Booongo head of account management and business development Yuriy Muratov.

“Within its beautifully crafted setting, stacked symbols mean any spin can lead to a lucrative win and the mystical Beast rewards players upon the reels. We look forward to seeing how our latest release is received by our customers and fans alike.”

Play’n GO has released two new games this week with the launch of 5x3 slot Rise of Athena and Viking Runecraft Bingo, a new bingo game based on the supplier’s popular 2017 slot Viking Runecraft.

“This isn’t the first time we’ve had multiple releases on the same day; we have built ourselves into a position where it is well within our capacity to deliver more than one high-quality title into the market simultaneously,” said Play’n GO chief product officer Martin Zettergren. “Of course, these are two different games giving two different experiences, giving more new options for operators to entertain their players, and that’s what it’s all about.”

FunFair Games’ Rocketeers, To The Moon

FunFair Games is set to launch its first game as a standalone games provider with the release of Rocketeers, To The Moon!

Part of the FunFair Technologies group, FunFair Games has partnered EveryMatrix’s RGS Matrix to distribute its content to its network of platforms and operators, with Rocketeers, To The Moon! expected to go live during Q1 2021.

“Having operated in the blockchain space for a few years now, we’ve realised the potential of multiplayer games and their ability to attract new audiences to the online casino sector, which has generally struggled to find a way of connecting with younger demographics,” said FunFair Games chief operating officer Lloyd Purser.

“We’ve decided to kick off with our own unique take on the tried and tested Crash-style games found at a number of leading crypto sites. Following this, we have more exciting, innovative multiplayer concepts in varying stages of development. These will all be available seamlessly through the RGS Matrix platform, with no further integration requirements for operators.”

Green Jade Games has unveiled the latest title from its KO series of games with the release of Troll K.O.

Set in the heart of an enchanted forest where players must defeat the trolls in order to claim their treasures and riches, Troll K.O has gone live in the UK with Lindar Media’s MrQ.com and will be available globally from 23 November.

“We are delighted with how the KO series is performing,” said Green Jade Games chief commercial officer Mark Taffler.

GameCo has entered into a new licensing partnership with Bay Tek Entertainment to launch an online version of popular American game Skee-Ball early next year.

“Skee-Ball is an iconic game played by millions around the world, and we are thrilled to welcome it to iGameCo’s growing iGaming portfolio,” said GameCo head of global business development Rich Maryyanek. “This partnership allows us to elevate the player experience and deliver the arcade game in a fun and competitive way that's never been done before.

Bay Tek Entertainment’s Holly Hampton added: “We are excited to work with GameCo to bring our classic Skee-Ball game to mobile and online casinos. As we look to bring Skee-Ball into a new gaming space, we know GameCo’s expertise in iGaming and esports makes them the right partner for our brand.”