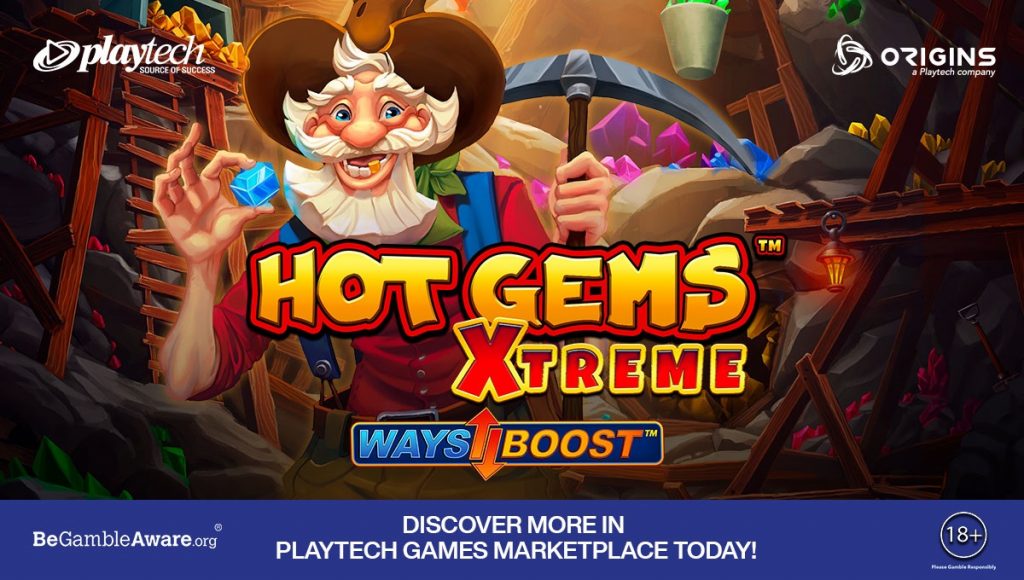 “The original Hot Gems game was a great success and, with the introduction of the highly popular Ways Boost mechanic, Hot Gems Xtreme offers even more excitement for fans of the original and new players alike,” said Origins game producer Yehonatan Tishler.

“With a wide range of innovative in-game features, including Mega Symbols and Mystery Walking symbols, plus a portrait-first design, Hot Gems Xtreme delivers the rich gameplay today’s players love in the format that fits the way they prefer to play.”

Playtech’s Rarestone studio has launched the first title in the supplier’s new Fire Blaze Golden series of games with the release of Amazing Factory.

“The Fire Blaze series has built a very loyal following, so we know there are a lot of players out there who will be very excited about the launch of Amazing Factory and the new Fire Blaze Golden brand,” said Rarestone studio lead James Stewart. “The new Golden Respins mechanic makes the gameplay more engaging than ever, and with the potential for locked prizes to repay on every spin in the round, there’s fantastic win potential here.

“With a catchy soundtrack and some of our most striking graphics yet, we’re confident players will be looking forward to hearing the bells ring at the Amazing Factory.”

Pragmatic Play has released the newest addition to its popular John Hunter series of games with the launch of John Hunter and the Mayan Gods.

The 3x5 slot sees the return of Pragmatic Play’s intrepid hero as he treks across the Mayan jungle in search of treasure. A golden mask acts as a Wild symbol, which can land on reels 2, 3 or 4. If a Wild lands and forms a winning combination, it will expand to fill the entire reel.

Three or more Scatter symbols will trigger the Free Spins mode, which is progressive, upgrading in level as more Wild symbols land. As players upgrade their level, symbols are upgraded to higher-paying ones, potentially triggering wins of up to 2,500x a player’s stake.

“Pragmatic Play’s hero returns in John Hunter and the Mayan Gods, as players look to uncover temples and progress through the Free Spins levels,” said Pragmatic Play chief business development officer Yossi Barzely. “Creating this iconic iGaming series has been a very exciting journey and we feel confident that this latest adventure will be warmly received.”

Candyways Bonanza Megaways is the second slot to be launched via Stakelogic’s Greenlogic program, in partnership with Hurricane Games.

The Megaways slot allows players to immerse themselves in a world of candy where they will find 512 ways to win with every spin and a selection of bonus features, including Free Spins, Super Stake and Gamble.

“Developing this game in partnership with Hurricane Games has been incredible fun and the result is a bold and bright slot with an enticing theme and fun and thrilling gameplay to match,” said Stakelogic sales director Salvatore Marino. “This is why we created the Greenlogic program as it allows smaller studios to showcase their talents and skills and work with us to ensure games deliver the best possible player experience. And Candyways Bonanza Megaways certainly does that.”

Hurricane Games CEO Damion Warren said: “We have long had a vision for Candyways Bonanza Megaways and by working with Stakelogic have been able to bring that vision to life in a way that has far surpassed our expectations.

“It is a truly incredible game, visually but also in terms of the fun, entertainment and big win potential it provides. We are beyond proud of Candyways Bonanza Megaways and look forward to seeing players enjoy the sweet experience it offers.”

“Golden Nugget is one of the largest and most established online casinos in North America and has been a staple of the US online casino industry,” said Everi executive vice president of sales, marketing and digital David Lucchese. “They also host the largest online game library.

“We are honored to have been selected to design a custom game for this industry leader as part of their seventh anniversary.”

Golden Nugget Online Gaming senior director Warren Steven said: “With the launch of the Golden Nugget Stepper branded game, Everi has been a committed partner and delivered an exceptional game for us to showcase.

“As we expand on our branded content, we continue to demonstrate the pledge of goldennuggetcasino.com to providing online casino patrons with the best and most diverse online gaming experience.”

“Players will undoubtedly be enthralled by the premium gameplay and visual effects that this immersive title has to offer, as we continue enhancing our renowned content suite with exciting new additions.”

BF Games is getting into the festive spirit with the launch of Stunning Snow Remastered, the fourth game in its Remastered series of slots.

“It’s great to add some seasonal spirit to our Remastered series with the release of Stunning Snow Remastered and we hope the remake brings ample joy to players during the holiday period,” said BF Games CEO Piotr Szpoton.

“As a classic game that has been enjoyed by players year after year, we have high expectations for the performance of the Remastered edition, offering the same popular gameplay but with enhanced graphics and sounds that sparkle.”

Realistic Games has added another Electrocoin land-based game to its portfolio with the online adaption of Magic 10.

“Magic 10 rounds off a stellar year of our collaborative project with Electrocoin and is set to be another hit with both fans of the brand and new players,” said Realistic Games commercial director Robert Lee. “Their games defined an era in the land-based sector and it’s always a pleasure to bring these titles to online audiences so they can continue to be enjoyed for years to come.”

Electrocoin president Gabino Stergides said: “Realistic’s recreation of Magic 10 is another triumph and we’re thrilled to see it launched in the online world.

“Their attention to detail and signature cabinet style has brought the game to life to give an experience that not only offers quality but also stays true to the original.”

“2021 will see us deliver more fun and innovative games like Frozen Gems,” said Play’n GO chief product officer Martin Zettergren. “2020 has been a resounding success for our partners, and for us, even in the face of some adverse conditions in the industry, and beyond.

“We made a promise to our operators, and we delivered. Next year we’ll set our aim even higher and, with their help, we’ll reach even more goals.”

“We are all getting in the Christmas spirit so we’re delighted to introduce True Lab’s second game developed via the YG Masters and our revolutionary GATI technology,” said Yggdrasil head of partner programs Stuart McCarthy.

“Christmas Tree is a fun-filled, captivating game that I’m sure will get everyone in the mood for the festive season. I’m sure players will love this game and, while we encourage putting on your best Christmas jumper, it’s not compulsory.”

True Lab chief business development officer Vasily Polynov said: “The capabilities of the superb state-of-the-art GATI technology is shown off to great effect with Christmas Tree. It’s been an exciting year for us and we are thrilled to release our second game as a YG Masters partner and to show off how well our relationship is working.

“In Christmas Tree, our developers have come up with such an innovative and immersive game that’s so enjoyable to play. It’s certainly going to be a happy Christmas for slot fans.”

RubyPlay is taking players to a winter wonderland with the launch of 5-reel slot Christmas Fortune.

“We couldn't wait for one of our favourite holidays to bring you this game, and so we have created Christmas Fortune,” said RubyPlay chief operating officer Ittai Zur. “Obviously I’m biased but I think it is one of the most Christmassy games on the market, and hopefully it helps to get people in the festive spirit.”

“In this thrilling title we introduce some exciting new mechanics and features that will have players engrossed as they try to unlock the gems and treasures inside the vault protected by Goblins,” said Kalamba Games chief operating officer and co-founder Alex Cohen.

“We are constantly looking to evolve our games and features and we are really pleased with this high-volatility title packed with chances to win up to 38,800x the bet.”

GAMOMAT has expanded its portfolio with the release of Ancient Greece-themed slot game Book of Juno, available exclusively to operators via the Oryx Gaming platform.

In the 5x3 game, the goddess Juno harnesses her power to move Bonus-Blocks during Free Games, while the Book symbol is Wild and substitutes all symbols except the bonus symbols within the Free Games feature.