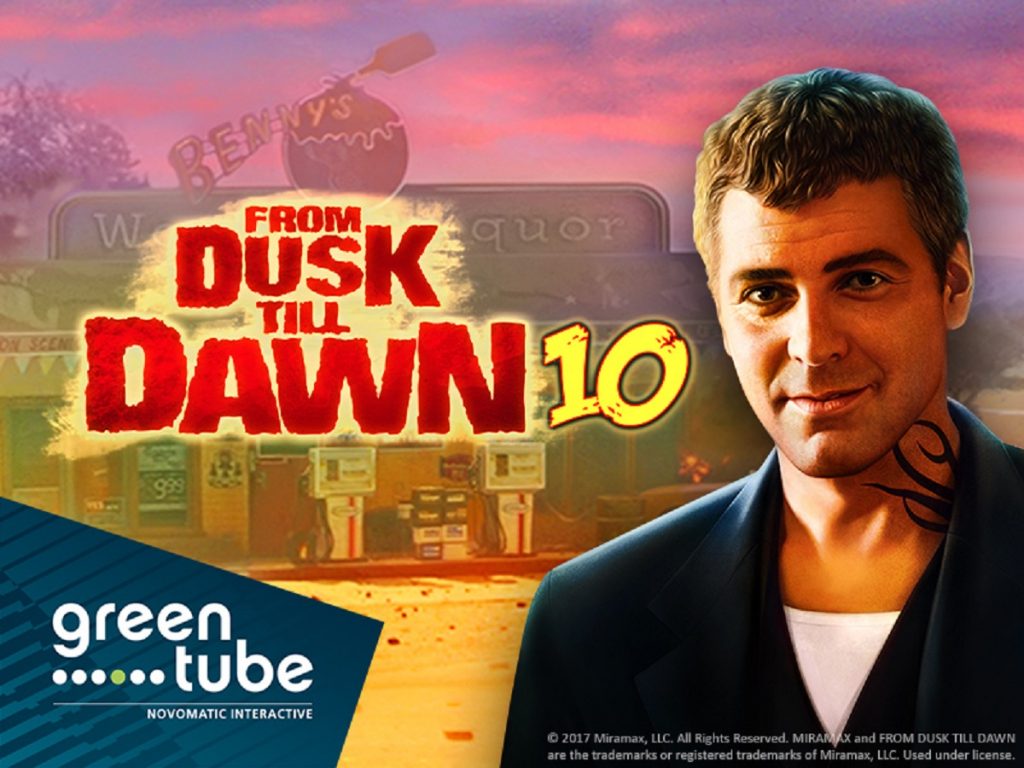 Greentube’s From Dusk Till Dawn 10

Greentube has added to its Home of Games portfolio with the launch of new branded slot From Dusk Till Dawn 10.

A sequel to the supplier’s previous From Dusk Till Dawn slot, the game features two reels and sees players join the Gecko brothers once again to help them survive a night in the craziest bar in town.

The slot features 100 win lines and transferring Wilds, as well as the Lock & Spin feature and Bonus Twister Wheel. The Free Spins feature is played with Wilds than can transfer onto the colossal reel and expand to increase winning chances even further.

Set in a virtual world overseen by a cyber geisha, players spin the cube to arrange single-coloured walls for a chance to multiply winnings.

“With Stunning Cube we are offering players a unique experience with fantastic 3D graphics, dynamic animations and thrilling features,” said BF Games CEO Piotr Szpoton. “Our development team has done a really good job with this title to ensure it stands out from the crowd and Stunning Cube really is a great addition to any operator’s lobby.”

Three or more hooked Bass Scatter symbols trigger the Bonus Round in the game, where the Fisherman acts as a wild. Each fish that lands on the reels has a monetary value. If no fish land on a spin, but the Fisherman does, he can throw dynamite on the reels, replacing symbols with fish for a higher chance of winning.

During the Free Spins mode, if more Fisherman symbols land on the reels, players can level up their Bonus Feature, adding more spins and more multipliers, with users able to trigger a multiplier of up to 10x in the round.

“Our Reel Kingdom products have allowed us to reach more players than ever before and we continue to enjoy a successful partnership,” said Pragmatic Play chief business development officer Yossi Barzely. “Big Bass Bonanza has a fun-filled theme and adds a money collect feature to the spins, ensuring that if the Fisherman is successful, players will enjoy the riches of a full catch.”

Stakelogic has launched its latest game to feature Big Time Gaming’s Megaways mechanic with the release of Super Joker Megaways.

The 3x3 slot uses Megaways to deliver up to 512 ways to win with every spin, and also includes Stakelogic’s Super Stake feature.

“Stakelogic is just as focussed on developing the best classic slots as we are modern video slots and Super Joker Megaways shows our dedication to these old-school games that still deliver a thrilling player experience,” said Stakelogic CEO Stephan van den Oetelaar.

“Combining three-reels with Megaways means that players have more chance to not only win, but win big. Not only that, but Super Joker Megaways looks great, sounds great, and provides one of the most engaging classic slot experiences out there.”

iSoftBet has released its latest 5x3 slot title Raging Dragons to exclusive partners for a two-week period before the game is launched across its wider network.

“Creating a diverse content portfolio is a key and we’re delighted to add Raging Dragons to our expanding offering,” said iSoftBet chief commercial officer Michael Probert. “With a huge number of multipliers and the lure of a Fortune Spin, a tussle with the Dragons on the reels can rewards players with immeasurable riches.”

“With the launch of Atlantis Megaways we’re delighted to be able to offer players another captivating and mesmerising game through our successful YG Masters program,” said Yggdrasil head of partner programs Stuart McCarthy.

“This slot has an astonishing number of ways to win and players will love the exhilarating gameplay and superb artwork that ReelPlay is known for. It’s hard to forget you’re not swimming in the depths of the mythical city of Atlantis.”

ReelPlay chief commercial officer David Johnson commented: “We are delighted to release our debut game developed via the YG Masters program. Credit to the Yggdrasil team who have been a delight to work with, whilst Yggdrasil’s GATI technology will ensure ReelPlay’s content reaches new audiences across a number of key jurisdictions.”

Blueprint Gaming has launched the latest addition to its Jackpot King series of games with the release of Mega Bars Jackpot King.

The five-reel slot is the first title from the Project retail catalogue to be released online by Blueprint following its acquisition of the UK land-based supplier in 2019.

“The Jackpot King series continues to prove incredibly popular,” said Blueprint Gaming director of marketing and relationships Jo Purvis. “Mega Bars Jackpot King gives players who like their slots with a more traditional theme the chance to get involved and win life-changing sums of money.

“Players used to a classic casino look will feel right at home. Mega Bars Jackpot King is so easy to play and we’re sure it’s going to be another hit for this captivating series of slot games.”

“To reiterate on multiplied wins with a respin mechanic has been really fun - I have high hopes that the fans of Tomb of Nefertiti will find it to be enriched and a worthy successor of the Egyptian throne,” said Nolimit City product owner Per Lindheimer.

The objective of the game is to accurately predict the outcome of the three dice, with players able to back a number of different bet types for each dice roll.

“Sic Bo is a truly classic game and we are delighted to be able to add it to our growing portfolio of live dealer titles,” said Ezugi business development director Pang Goh. “Sic Bo will be the first of three dice game variants Ezugi will be bringing to the market in the near future.

“Sic Bo will be streamed in high definition from a dedicated studio manned by some of our most experienced dealers to ensure players have the best time when playing the game. The popularity of live casino is on the rise and we strive to provide our partners with a portfolio of quality content to offer their players making the addition of Sic Bo an important milestone.”

Lightning Box is taking players Down Under in its latest slot release Bondi Break, which has gone live exclusively with Kindred Group before a wider roll-out early next month.

“We’re hoping ‘surfs up’ in our new game, Bondi Break, which we’re very excited to be releasing via Microgaming,” said Lightning Box CEO and co-founder Peter Causley. “Our latest release is a real Aussie crackerjack with a great feature and a rip-roaring Free Spins round, complete with a Surfer Collection which will have players waxing their boards in anticipation.”

“The continued growth of our slot offering, with high-performing titles across the board, has been a real highlight for us throughout 2020 and we look forward to releasing our last title of the year to great success.”

“Packed with prizes and full of celebrations, Xmas Keno Cat is here to bring an adorable twist to everyone’s holiday season, and with bumper prizes galore - we’re sure it will be treat for all players’ stockings.”

“With an inviting cast of characters, sensational symbols and mega multipliers fit for a Sherriff, Wild Bullets is the latest in a long line of gripping Evoplay Entertainment game releases designed for an emerging demographic of tech-savvy gamblers,” said Evoplay’s Kravchuk.

“Having added a thrilling range of games to an innovation-packed offering that is enjoyed by an ever-growing army of fans, it’s been a hugely successful year for our company – and we look forward to delighting our players with plenty of action-packed launches throughout the year ahead.”

NetGame Entertainment has launched the second instalment in its Egyptian-themed Book of Nile series of games with the release of Lost Chapter.

“Matching the huge success of our release of Book of Nile: Revenge was always going to be a tough ask, but our creative team have triumphed,” said NetGame Entertainment head of business development Andrey Vajdyuk. “Lost Chapter builds on the original story and immerses players within an absorbing journey where huge wins are available through several epic features.”

“With Christmas fast approaching, we’ve pulled out all the stops to make sure our players and fans can truly have a holiday season to remember no matter what may be happening outside,” said GAMING1 chief operating officer Sylvain Boniver. “Both our games are real crackers and stuffed with stunning graphics and catchy festive music to ensure that Robo Santa’s Factory and Christmas Dice deliver for players every time - whether they’ve been naughty or nice this year.

“After all, there’s nothing like seeing a stack of presents under a beautifully-decorated Christmas tree and we’re sure our loyal players will love trying to unwrap them to discover some amazing prizes.”