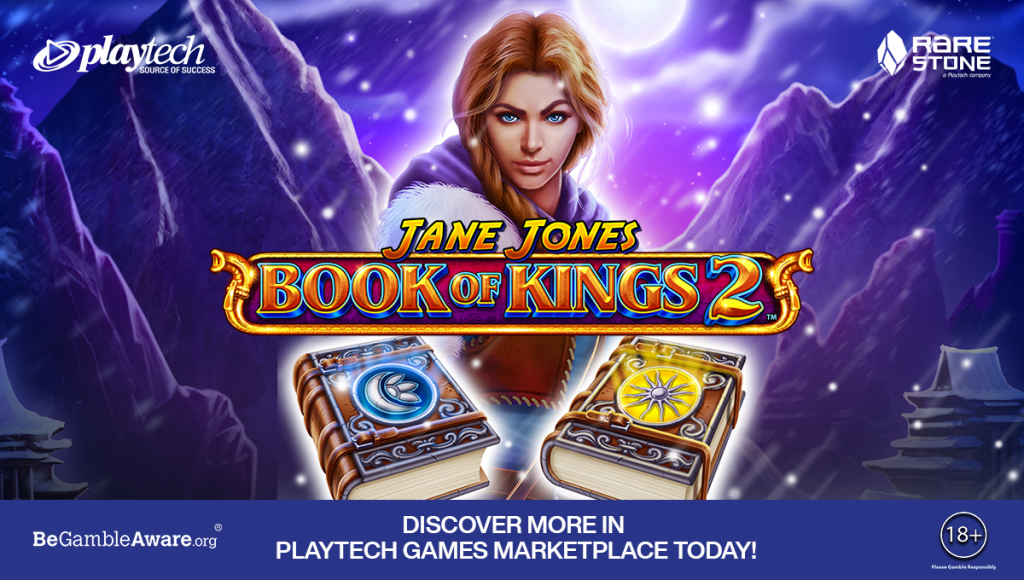 The sequel is a 3x5 slot that offers 10 paylines and two free games features which include a random special symbol that expands to pay in any position on all lines.

“Book of Kings was one of the major hit slots of 2020, so we’re very excited by the launch of the brand new sequel - and we know players will be too,” said Rarestone chief operating officer James Stewart. “Jane Jones is bringing two play modes, classic Day Mode and mystery-triggered Night Mode.

“Night Mode offers more Free Games triggers and retriggers. We’re confident fans of the original and experienced players looking for high-volatility gameplay will love what they find when they open Book of Kings 2.”

The game's Butterfly and Congo Cash symbols can land players one of the huge money prizes displayed on the jewels above the reels, with three jackpots on offer; Minor, Major and Grand, as well as a Free Spins mode which can be triggered if three Scatter Symbols land on the reels.

“While it may be difficult to travel at present, this won’t stop slot lovers from getting a real taste of the tropical in our enticing new title, Congo Cash,” said Pragmatic Play chief business development officer Yossi Barzely. “Filled to the brim with jackpots and free spins, players have every chance of leaving the jungle with their pockets filled with untold riches.”

Stakelogic is taking players on a mystical adventure with the launch of its latest 5x5 reel slot Mayan Rush.

In the base game, each consecutive win removes ancient blocks from the reels, which in turn allows for more wins from that spin. When all blocks have been removed, the game enters Rush Mode, where any winning symbols are assigned to either the multiplier totem or the life totem, based on their colour (warm or cold).

Collecting five symbols of either warm (red, orange, yellow) or cold (green, purple, blue) increases the respective totem value (warm is life, cold is multiplier). A win adds all winning symbols to the total while a losing spin deducts one life. Re-spins are awarded until no lives remain.

“Players find themselves at the heart of a Mayan quest for treasure and as they smash away the ancient blocks the big win potential really builds. This is a great addition to our growing portfolio of titles and one I believe will be a big hit with players as they seek out their own ancient treasure.”

“Vegas Cash Spins is one of our stand-out titles of this year’s first quarter,” said Inspired chief product officer Steve Collett. “This game is not highly volatile, but it can deliver 1,000x bonus wheel prizes. The theme and style should appeal to all players along with its 25-win lines and the game’s cash spins resetting live bonuses.

“I’m confident that this game will be a huge hit for our operator partners. It delivers the experience of playing on a classic Las Vegas slot machine, while in the safety and comfort of your home or in the palm of your hand.”

Yggdrasil has expanded its slot portfolio with the release of Frost Queen Jackpots.

“Frost Queen Jackpots transports players to an icy castle in the bitter midwinter with the chance to escape with massive jackpots,” said Yggdrasil senior games strategist Jonas Strandman. “Despite the cold theme, the audiovisual presentation gives a fuzzy warm feeling for the cold winter days.

“Yggdrasil’s multi-feature jackpot games have been player favourites for a half decade and Frost Queen Jackpots follows in line with simple rules, big variety of features and frequent jackpot chances.”

Green Jade Games has released the latest game in its Knock Out series of slots with the launch of Alien K.O.

“Our K.O series is proving to be incredibly popular with players as it combines elements of skill with RNG gameplay,” said Green Jade Games chief commercial officer Mark Taffler. “The Alien theme has been incredibly well executed by our design team, and provides an engaging and entertaining game that players can return to time and again.

“These games really are unique and allow operators to acquire and retain players at scale, while also standing our from their rivals.”

Kalamba Games has expanded its portfolio with the launch of Ducks Till Dawn, developed in partnership with Kindred Group.

“Ducks Till Dawn is our latest adrenaline fuelled slot recreating the amusement park shooting range many of us are familiar with, offering players a unique theme,” said Kalamba Games chief operating officer and co-founder Alex Cohen. “We are really pleased with the feature set in this title, which makes the game more exciting and engaging and will have players coming back for more.”

“We are delighted to launch Shamrock Treasures, an all-Irish adventure following the likeable Fergus O’Fun on a quest to find the gold at the end of the rainbow within a simple yet engaging 3x3 grid,” said FunFair Technologies chief operating officer Lloyd Purser. “With an immersive set of symbols appearing alongside our exhilarating bonus round, it’s a no-nonsense slot that fun-loving players won’t want to miss.”

“We are delighted to unveil 5 Super Sevens & Fruits, a top-quality addition to our hugely popular Timeless Fruit Slots portfolio,” said Playson head of product Vsevolod Lapin. “Cranking up the temperature with a new twist to the iconic Red Sevens, the release combines thrilling enhancements with timeless visual effects and classic casino sounds to create a gaming experience with something for everyone.”

Players are required to pick the outcome in a given set of matches (home or away team victory, draw) along with predicting the jackpot trigger match score, with players receiving a prize if the outcome is predicted correctly.

“I’m extremely pleased to present our latest game, which will be available for our B2B partners shortly,” said Scout Gaming chief product officer and co-founder Andreas Sundal. “Scout Gaming has the ambition to revolutionize the market for sports related betting and our objective is to increase our product suite constantly going forward.

“We have so far experienced heavy growth with our fantasy offering and this should be seen as a widening of our portfolio to also include additional relevant markets and product types.”

Radi8 Games’ Year of the Ox

Ahead of the Chinese New Year next month, Genesis Gaming’s Radi8 Games studio has released Year of the Ox.

“The Ox symbolizes a strong, hard-working spirit, and we made sure that was felt with the powerful anticipation and celebratory animations when you play this game,” said Radi8 brand owner Peyman Zadeh. “The wild multiplier and increasing multiplier features drive home that power and force. We hope to bring a fun, energetic experience to everyone on this festive occasion.”

Play'n GO is also cashing in on the Chinese New Year with the release of its 5x3 slot, Bull in a China Shop.

“Some operators may rush to push games out to trade on the popularity events like Christmas, Valentine's Day etc. may bring,” said Play'n GO chief product officer Martin Zettergren. “We have always maintained that we only release games if the time is right, and the game is the right fit for our plans at the time.

“Bull in a China Shop is a highly entertaining game and will add a little bit of fun and entertainment for anyone who enjoys Chinese New Year.”