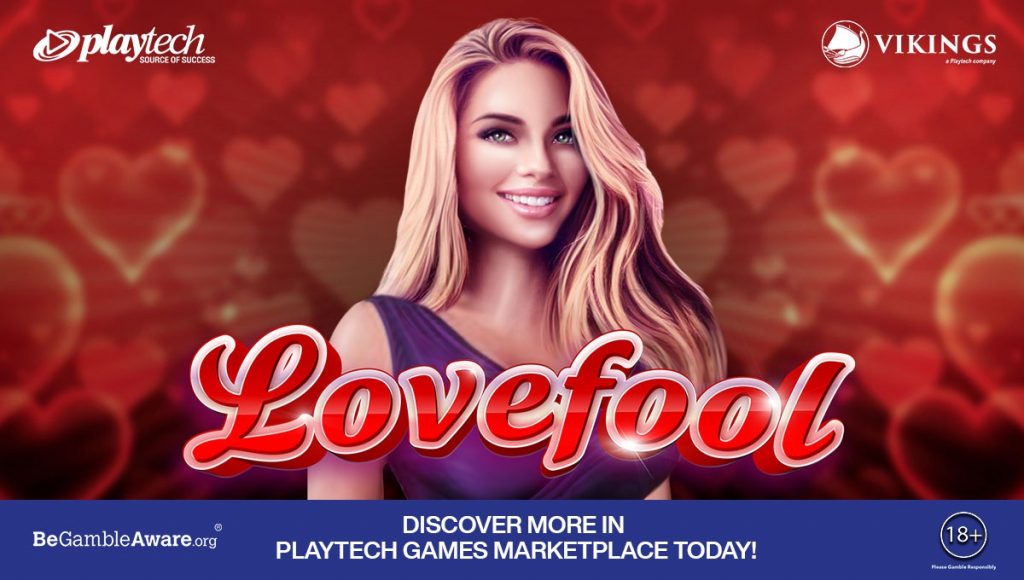 The 25-line slot sees Wild symbols on reels two, three and four expand to fill the reel they land on. Heart symbols show cash prizes and win multipliers for a guaranteed win when two Scatters land simultaneously, while the Lock and Respin feature offers cash prizes, win multipliers and three types of jackpots.

“The success of games such as Better Wilds, Halloween Fortune and Jackpot Bells shows there is a strong market for seasonal content,” said Vikings head of game development Andreas Bexelius. “However, while Lovefool offers a great promotional opportunity for operators around Valentine’s Day, our key aim was always to create a great game.

“With an engaging bonus feature and multiplier-boosted cash prizes, plus the chance to win one of three Special Award prizes, we know Lovefool is a game players can enjoy all year round.”

The slot offers five paylines while the Progressive Feature teases untold riches from the treasure trove guarded by dragons. The gameplay features a multiplier which increases on each non-winning spin to reward players with up to 1,250x the bet as Wilds increase the win potential.

“Blast away the winter cold with a lucrative journey to experience the Kingdom’s searing heat,” said Pragmatic Play chief business development officer Yossi Barzely. “The intuitive gameplay is boosted by a beautifully designed backdrop of caverns filled with gold - some of which the bravest adventurers can scoop from under the dragon’s nose. Dragon’s Kingdom - Eyes of Fire is red hot and sure to please operators and players alike.”

Inspired Entertainment has also launched a Valentines-themed slot game with the release of Stacked Valentine Hearts.

“Stacked Valentine Hearts is a vibrant and cheerful game set to uplift people’s spirits and get them in the mood for love,” said Inspired vice president of interactive Claire Osborne. “Emulating the gameplay of Gold Cash Free Spins, one of our most popular and highest-performing games of 2020, this game delivers bags of enjoyment and rewards.

“Its robust mechanics, colourful icons and seasonal theme will have players engaged and highly entertained throughout the season of romance and beyond.”

“This game is a result of a strong collaboration between Leap, IMGA and Turkish Airlines EuroLeague, and it brings the virtual sports experience to a whole new level,” said Leap CEO Yariv Lissauer. “By engaging with the game, customers can relive the unforgettable moments of the greatest basketball match-ups in the Continent.”

IMG Arena managing director Freddie Longe added: “We are extremely proud of our partnership with EuroLeague Basketball. There can be no doubt that they organise one of the world’s leading basketball leagues and we are delighted to be extending our relationship further with the launch of this exciting new product vertical.

“When we invested in Leap Gaming, our vision was to create official products and unlock new revenue streams and forms of fan engagement for our clients. In EuroLeague Instant Legends we believe we have developed a successful new concept for our always-on content portfolio.”

“The release of GIZA Infinity Reels through our YG Masters program offers players another captivating game experience for the new year,” said Yggdrasil head of partner programs Stuart McCarthy. “The intricate artwork and immersive soundtrack provided by ReelPlay blend effortlessly with the fast pace of the game, which will leave players across the world delighted with their in-game experience.

“It is yet another title which was built using our proven GATI technology which allows Masters studios to quickly develop content followed by rapid distribution into global markets.”

Salsa Technology’s Pile it Up

Salsa Technology has expanded its offering with the launch of its first slot game, Pile it Up.

“Pile it Up takes the fruit-themed slot game to a whole new level of innovation, excitement and fun,” said Salsa Technology CEO Peter Nolte. “Salsa’s first adventure into slot games has delivered a title that sets itself apart from the existing content thanks to the unique gameplay, design and maths model.”

“Win in Rome is a highly volatile slot that will take players on a fun and action-packed adventure to the heart of the Roman empire and where they must do battle in order to unlock the riches found within the game,” said Live 5 CEO Lloyd Butler.

“The slot boasts some incredible mechanics, in particular the Infinite Free Spins, delivering tremendous big win potential but also great entertainment value. This is a nice addition to our growing portfolio of slots and we look forward to seeing it land in operator game lobbies.”

“We are delighted to unveil Totem Towers, an all-action adventure through the jungle designed for players hungry to experience the ancient civilization of the Mayans,” said Habanero head of corporate communications Toni Karapetrov.

“As well as Habanero’s signature mixture of realistic visual effects and immersive sounds to match, the title ups the ante with the exhilarating Line Boost and Totem Tower features, creating fresh chances for gamers to discover wins.”

Nolimit City has expanded its portfolio with the launch of its latest 5x3 slot East Coast vs West Coast.

“Going back to the golden era of Hip Hop working with graffiti and killer soundtracks has been pure magic. It’s the game that has been the most fun to work with, and the result shows,” said Nolimit City product owner Per Lindheimer. “This is fo’ sho’ a landmark in Nolimit City’s portfolio and hopefully something that will bring you back to the time of the biggest Hip Hop legends.”

iSoftBet is celebrating Chinese New Year with the release of Book of Cai Shen.

“With the excitement of the Lunar New Year just days away, it’s the perfect time to welcome in a prosperous new cycle with our latest hit, Book of Cai Shen,” said iSoftBet head of games Mark Claxton. “This timely slot is part of our seasonal release strategy and we expect it to perform well with previous games such as Fortune Pig becoming instant player favourites.”

“As part of our drive to provide innovative new games, it is also sometimes prudent to consider the classics and Rock Paper Scissors is most certainly that,” said BetGames.TV founder and chief product officer Vygerdas Jonikas. “Alongside our stable of popular games, Rock Paper Scissors is sure to fit in well with its quick-fire and simple yet alluring gameplay.

“We’re confident that our recreation of one of the most recognisable and loved games of all time will provide huge scope for our operators to drive traffic to their sites.”

NetGame Entertainment has announced the release of Zen Zen Cash.

“Zen Zen Cash allows players to transport themselves to a relaxing Far East world where there is the opportunity of vast riches,” said NetGame Entertainment head of business development Andrey Vajdyuk “The multiple bonus features promise huge cash returns for those who earn the luck on the reels.”

Play'n GO's Cat Wilde in the Eclipse of the Sun God

Play'n GO has launched Cat Wilde in the Eclipse of the Sun God, a new Mexican-themed slot featuring the daughter of its popular Rich Wilde character.

"There are so many games fighting for players' attention in today's market, it can be challenging for games to attract an audience, and for operators to keep their players with them," said Play'n GO chief product officer Martin Zettergren. "When players find a game that they love, they will tend to revisit it, but they want assurance that they'll be getting a good experience when looking for something new.

"People know the Wilde series of games are fun and entertaining. They know what they're getting in a new instalment, and that inspires trust and loyalty."