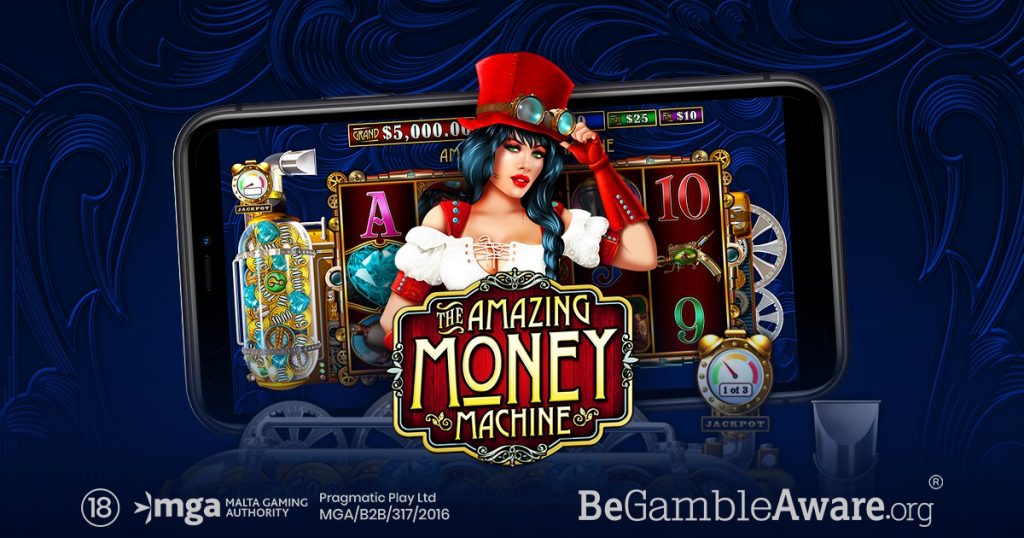 With two possible bonus rounds that can be triggered, the Respins and the Jackpots, the feature-packed game also contains expanding reels which can assist in triggering either bonus modes, as well as a Respin Wild feature which adds random Wilds to the screen for a single respin.

“We’re delighted to add this latest title to our portfolio and are confident The Amazing Money Machine will be a huge hit with fans,” said Pragmatic Play chief business development officer Yossi Barzely. “The development of our Hold and Win portfolio remains of great importance to us and we can’t wait to see how this game is received by our operator partners across the globe.”

iSoftBet has expanded its slot porfolio with the launch of its new Asian-themed release Pearl Legend: Hold & Win.

“Pearl Legend is the latest enchanting Hold & Win player-first product in our portfolio, reinforcing our commitment made in the brand manifesto, and we couldn’t be happier with it,” said iSoftBet head of games Mark Claxton. “Packed with features and a vast array of modifiers in the respins mode, there’s so much for players to enjoy in their hunt for the glimmering pearls.”

“We’re delighted to be launching Scarab Gold, which transports players to the mysterious era of Ancient Egypt and gives them 15,625 cascading ways to potentially win big,” said Inspired vice president of interactive Claire Osborne. “Regarded as one of Ancient Egypt’s most popular amulets, the game’s jewelled Scarab represents good luck and fortune, which are welcome sentiments among all slot enthusiasts.

“Its beautiful, vibrant graphics coupled with the Mystery Boost gameplay mechanic and its free spins bonus will help make Scarab Gold a successful hit among players and our operator partners alike.”

Blueprint Gaming’s Crypt of the Dead

Blueprint Gaming has expanded its portfolio of games with the launch of 6x3 slot Crypt of the Dead.

“While the industry is rightly pushing the boundaries of innovation in game design, there is most definitely still a place for this traditional genre and style of game, one which casino operators are wise to continue to capitalise on,” said Blueprint Gaming director of key accounts and marketing UK Jo Purvis. “Crypt of the Dead serves this segment fantastically well and with its host of proven features developed to strike a chord with players, I’m confident it will prove a valuable addition.”

“We’re no strangers to pulling out our revolvers, and it’s time again for another shootout taking place down in the infamous border town - El Paso, Texas,” said Nolimit City product owner Per Lindheimer. “The xNudge mechanic is the glue of the Ol’ Wild West trinity, but this slot has really outgrown a single six-shooter - this slot holds more features than a Gatling gun holds bullets…”

Kalamba Games has released the latest addition to its successful Joker series with the launch of Joker Times.

“Our Joker games show no signs of dwindling in popularity and with Joker Times, we add another thrilling title to our offering,” said Kalamba Games chief operating officer and co-founder Alex Cohen. “Packed with the engaging mechanics and features that we are known for, players will be able to escape to a fairytale castle and enjoy an entertaining ride through history while chasing big wins.”

“With additional thrilling game launches lined up for the near future, as well as further high-profile commercial partnerships, OneTouch is set for a busy 2021,” said OneTouch head of business development and operations Petra Maria Poola.

Evoplay has announced the release of its latest classic-themed slot Cycle of Luck.

“Offering a retro gaming experience with a modern twist, Cycle of Luck showcases the multi-faceted nature of our approach to game design,” said Evoplay CEO Ivan Kravchuk. “Designed to fit the requirements of classic slot lovers, we’ve also added a host bonus features to elevate the gameplay, so we look forward to seeing how the title is received by our international audience.”

Belatra Games has expanded its portfolio with the release of its Master of Gold slot game.

“Master of Gold is a shining example of our commitment to creating engaging and fun slot games,” said Belatra Games deputy director of sales and marketing Sergey Chernyavski. “Players must pit themselves against the bearded protector for a chance for gold and the bonus game promises vast riches for those who rise to the challenge.”

“81 Frutas Grandes leverages a popular theme that players - seasoned veterans and casino newbies alike - around the world continue to look for in casino lobbies,” said Tom Horn Gaming CEO Ondrej Lapides. “The Wild multiplier feature is a nice add-on which spices up the player experience and contributes to nice payouts.

“We believe the game with its 81 paylines will appeal to fans of classic slots and will support our further growth in new regulated markets where this concept enjoys high popularity.”

“Minotaur takes the fantasy theme and combines it with unique gameplay that brings together the best elements of both classic slots and modern video slots - simplicity and a range of features that ramp up the big win potential,” said Live 5 CEO Lloyd Butler.

“With slots becoming ever more complex, we wanted to strip things back with Minotaur and really focus on the player experience to ensure the game is highly entertaining and thrilling to play. The team has certainly achieved this and we look forward to seeing players take on Minotaur.”